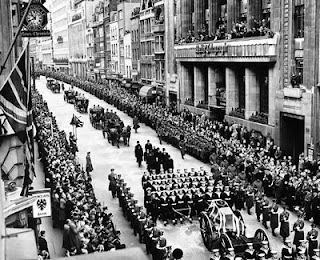 As one of the "baby bulge" children, I am of a generation that missed the war, but it is still very close and very real. As a child, much of my time was spent exploring bomb sites, old bomb shelters, pill boxes and the paraphernalia of war.

Churchill was still alive when I was born, he was to have a spell as prime minister as I grew up, and I was one of the hundreds of thousands who filed past his coffin when he died and watched his funeral (pictured). You really did then have a sense that a moment in history had passed.

With that, the war is part of my make-up and that of my peers. It shaped my generation and gave us much of our "world view", defined who we were and how we felt about ourselves. And within that period of the war, there is that very special Battle of Britain. It may not mean as much to the current generation – especially as history teaching is so poor – but it really does have a very, very strong influence.

It was about our parents, and the British nation, which stood up against the forces of evil. We, us and the Commonwealth and Empire, held the line and good prevailed. The Battle of Britain had a certain innocence and purity about it. It made you feel good about yourself because you were British, it was a British achievement and it was part of your heritage.

Perhaps, therefore, I should have stopped with the myth, and not looked too closely at the detail. For sure, I've read many of the books, seen the films such as "Reach for the Sky", watched the old newsreels and seen no end of documentaries. But look closer and much of the myth does not stand up to scrutiny.

That much should hardly come as a surprise – myths very rarely do. But what has been conveyed is a nation at war, protected by a Royal Air Force that was focused and, where it mattered, efficient yet humanitarian.

The closer one looks, though, the less efficient and – particularly – the less humanitarian the RAF begins to look. We are, for instance, more or less familiar with the decision in 1940 to shoot down German air-sea rescue aircraft, painted white and bearing red crosses. This is rehearsed in some detail by Robert Fisk and in this case one has to agree with him. The British were wrong to shoot them down.

Although the type used for rescues – the Heinkel 59 – was operated by the Luftwaffe, armed and camouflaged, the aircraft bearing red crosses were genuine "air ambulances". They were adapted and equipped for humanitarian missions and, cruicially, operated by a civilian search and rescue organisation, the Seenotdienst.

But, if you can tolerate that, in the interests of our own survival, we broke international law, what is totally baffling is that, while we were shooting down German air-sea rescue aircraft which were saving our own airmen, we had no equivalent (or any) rescue provision of our own.

Thus, while the RAF was struggling to find enough pilots to man its aircraft, this fascinating report points out that "the absence of an effective SAR capability aggravated the situation since the downing of an aircraft in the Channel or North Sea usually meant the loss of its aircrew."

Here, it is not just the lack of concern over the humanitarian issue that offends. It is the utter stupidity of failing to value a scarce and, at the time, irreplaceable asset, upon which – as legend would have it – the fate of the nation rested. If we were so short of pilots, then it was criminal stupidity to allow them to drown when they were shot down over the sea, for want of a rescue service.

But, if this was 70 years ago, the sentiment – and the stupidity – has not changed. Still, as we saw with the "Snatch" Land Rover debacle and many other equipment issues besides, the State continues to be careless about putting lives at risk. And it still fails to take the most obvious and cost-effective measures to safeguard them.

What is perhaps the greater offence, though, is the legions of historians, analysts and writers who have so diligently and at such great length recorded the history of the Battle of Britain. Precious few mention this egregious failure and even Deighton gives it just one paragraph. "The fighting over the sea," he writes, "was an added worry for Dowding for, unlike the Luftwaffe, his pilots had no dinghies, no sea dye and no air-sea rescue organisation."

Patrick Bishop, on the other hand, repeats the canard that the ambulance aircraft were armed – they were not – and that they had been observed carrying out reconnaissance tasks. They had not.

As with the media, historians and others hold past events up to scrutiny, so that we might learn from them. In the absence of that scrutiny, we do not learn. And the lesson that we have not learned, sufficiently at least, is that even when its survival is dependent on it, the State will still throw your life away, for no reason than its own stupidity.

That we have been allowed the impression that, all those many years ago, the State knew what it was doing, and actually cared for those to whom it owed so much, is to have taken us for fools. More to the point, perhaps, we have allowed ourselves to be taken for fools. But the lesson is still there to learn. The State is not your friend. And, if you let it, it will kill you.