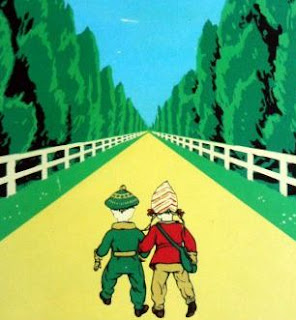 Look how nice I am to you ... a post about the Clegerons and no facial picture. I can spare you that at least. But then you don't need faces for gaffes – and gaffes there have been aplenty. First, we have The Great Leader (or The Boy, if you prefer ... although we could do a mind-meld and have The Great Bleader ... I digress, but then I told you I was in a silly mood).

Anyhow, onto TGL, who is in Washington where, yesterday we picked him up from a WSJ op-ed talking about junior partners in the 1940s and the 1980s.

But, without his speech writer to hand, having to go solo on Sky News, The Great Leader completely ballses it up, telling Boulton: "We were the junior partner in 1940 when we were fighting the Nazis."

No we weren't - everybody knows that. The Septics weren't even in the war then and, as for being partners, they were even less well equipped than we were. In Europe, at least, we were very much the senior partner until the Allies were safely ashore at Normandy in 1944, and Ike took over as supreme commander. Up until then, we had called the shots, including the "Europe first" policy.

Now, it may look to be a small point – but it isn't. We have a man masquerading as a British prime minister who doesn't know any history. More to the point, anyone who could come out with that sort of crap has no feel for history. Different people use slightly different words. Some would say he isn't "centred", others say "rooted" and others use the word "bottomed", meaning "founded". But they all mean the same thing. Anglo Saxons would use four letters.

Any which way, if this had been an interview for the job of prime minister, the man-child should have failed. It is unthinkable that anyone with a feel for this nation of ours, and aspirations to lead it, could have been so crass.

Which brings us to Clegg. This child has been left in charge of the shop while The Great Bleader has been playing away. And, according to The Guardian and others – including Hansard, as the fool spoke the words at the the dispatch box – he has declared the Iraq war to be "illegal".

The only real things you can say about this is that Cameron and Clegg really do deserve each other – and we don't. Be we the thickest electorates in the history of ... electorates, we didn't deserve this. We really didn't.

There are certain things you don't do in life. One is fart loudly in church during the sermon. The other is to declare the Iraq war illegal when you are pretending to be deputy prime minister and the doorkeeper has let you into the Commons chamber by mistake. Somebody might just take you seriously.

For sure, a lot of people – even a few of our readers, who should know better – might agree with the loathsome Clegg. But, if you value the idea of sovereignty, there is no such thing as an "illegal" war. If it has been declared and conducted in accordance with national laws, it can be wrong-headed, unwise, even immoral - but not illegal.

But even if you do think that it is illegal, you don't stand at the dispatch box and say so. And such is the creaky mental architecture of this fool that he is now insisting that he was speaking in "a personal capacity". This child isn't safe to be let out on his own. One is not even sure that a sojourn without nappies is a terribly good idea - although the nappy should be wrapped round his face to keep The Little Bleader quiet.

I think you may now see why I am having a little bit of difficulty at the moment. How do you take these cretins seriously? How can one come to terms with the fact that they are in charge of our government?

And, by the way, we learn that two more soldiers have been killed in Afghanistan – both shot, and both in the same incident. As part of a combined force, they had gone to the rescue of a wounded colleague. But the really worrying thing here is the location – Lashkar Gah.

This is the place at the heart of the British military presence in Helmand, hitherto regarded as so secure that ministers and other VIPs are taken here for walkabouts. Then they can go home as "warriors" and prattle about having "been there" – the fabulous "wenneyes" – and how much progress there has been.

That troops are now being killed and injured in the streets of Lashkar Gah is a measure of how far down the pan the Afghan adventure has gone. If the man-child at the top of our government and his fatuous sidekick think we can hold out until 2014, then they are as seriously stupid (and dangerous) as they appear to be.

But, as we are beginning to see, with the calamity cretins in charge, anything is possible. Now would be a good time to run for cover.