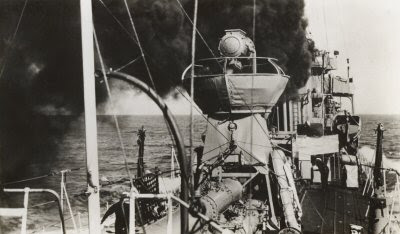 In view of what actually happens on this Saturday, 70 years ago, the official account almost has a comic element to it. Initially, we are told:


Enemy activity appeared to have further decreased and those aircraft with few exceptions approaching the coast seemed to devote their attention to reconnaissance of shipping and to attacks when opposition was not immediately encountered but turned away when fighters were in the vicinity.

In fact, Luftwaffe operations start about 09:45am, with an attack on a convoy off Swanage, Dorset. Simultaneously, two convoys off the estuary are bombed, and a group of ships off Harwich come under attack.

Read more on DAYS OF GLORY
Posted by Richard at 23:37