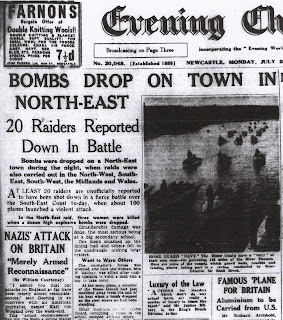 The weather on this Sunday was fair, although it clouds over in the evening limiting flying in some areas. The morning sees attacks in Cornwall, Cardiff and Newport. In the early afternoon, a sizeable force of forty bombers escorted by Me 109s heads for Dover. Nos 74, 41, 11 and 257 Sqns engage. The raid is broken up.

Major Werner Mölders, Geschwader commander of JG 51 and one of the top three Luftwaffe pilots up to this time, is severely wounded after mixing it with Sqn Ldr "Sailor" Malan, CO of No. 74 Sqn. Mölders manages to return to base but takes no further part in the battle for over a month.

In Newcastle, twenty-five high explosive bombs are dropped almost in a straight line across the city. There is considerable damage. Three women are killed. One woman and two men are injured. (One report attibutes this to 18 July, although an official report puts it on this day and the newspaper confirms it.)

Read more on DAYS OF GLORY
Posted by Richard at 16:29