You can't fault the logic 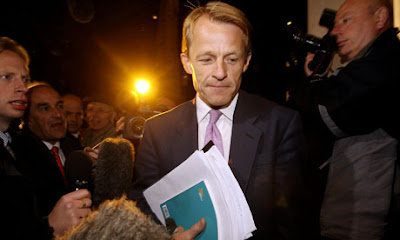 "Once an individual claims any kind of state subsidy, his privacy is forfeit: the humblest benefits recipient could confirm that," writes Gerald Warner. Simples really, so it is quite amazing that a politician like David Laws, slated as the "pocket genius" by The Guardian, couldn't see it. But then, he lives in the bubble and, as we keep saying, in the bubble they are blind.

Warner states the obvious: "The one certain way to have preserved his privacy was for Laws to have claimed no money – as he could easily have afforded to do. Laws is a multi-millionaire as a result of his previous career in banking: he was a vice-president of J P Morgan and then the managing director of Barclays de Zoete Wedd, before he was 30."

But then, if you are going for public office, it's not so clever expecting privacy, and more so if you are taking public money. "That an MP with that kind of personal wealth elected to take more than £40,000 from the taxpayer says it all about politicians' sense of entitlement," says Warner. It also says the man was so far up his own backside (to coin a phrase) that he could not see how his actions would play in the real world, especially as he was far from being the innocent that he would have us believe.

Warner avers that it was the sense of entitlement that brought him down. You can't fault the logic. His private life was revealed by Laws himself, in a transparent attempt to claim victimhood.

To some degree that ploy succeeded, as the Dianafication of the former Chief Secretary among his colleagues and some elements of the media over the past 24 hours testifies, Warner adds. Cameron's letter also said: "Your decision to resign from the Government demonstrates the importance you attach to your integrity." It is good to have that on record, Dave, Warner notes. Otherwise we might have imagined it had something to do with greed, media exposure and public anger.

And, if you want to pick any one, try the last. It is quite fun to watch the likes of Iain Dale squirming, not least because it confirms that they (the political classes) still don't get it. Even more is this confirmed by fellow homosexual Matthew Parris who describes Laws as having "made an error of judgment," for which he should not have had to resign.

He made an "error of judgement"?! HE BROKE THE FRAKKING RULES, PARRIS!

What we have been trying to do on this blog - what Warner and others do routinely - is convey to the denizens of the Westminster bubble how loathed they are. This is not something we make up, that we pluck from thin air - that somehow, we woke up one day and decided "we hate the political classes". It is something we pick up, from the real world. The one the political classes don't inhabit.

Thus, when something like the Laws affair erupts, normal rules don't apply. People have been sensitised. They are already of the firm opinion that the political classes are a bunch of self-serving shits. That is the "default" mode. Episodes like this simply confirm that which is already held to be true.

How the political classes break out of this death spiral (if, indeed they can) is going to be interesting to watch, but simply whingeing about the injustice of it all – à la Dale, and that idiot Parris - isn't going to cut it.

LAWS THREAD
Posted by Richard at 08:34