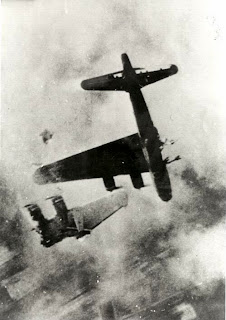 If the euro was an aeroplane, it would look rather like the doomed specimen depicted. The signs have been with us for a while but The Times charts the latest developments, with the euro crashing to an 18-month low against the dollar, falling below the $1.25 level for the first time since March last year.

All of this has to be seen against the backdrop of the continuing efforts to bail out Greece and stop the contagion spreading, not helped by seamy details emerging over Sarkzoy's threat to withdraw France from the single currency.

Ambrose Evans-Pritchard thinks we are now near – or beyond – the point of no return. The moment of definition is fast arriving from Britain, he writes. The measures now being demanded to save monetary union cannot and (he says) will not be accepted by this government, Nick Clegg notwithstanding.

The outcome – une véritable gouvernement économique – will put Britain and the eurozone on such separate courses that it will amount to separation in all but name. The sooner we get the nastiness of divorce behind us, the better.

Stirring stuff this is, but there is nowhere any sense that the seriousness of the situation is recognised in Whitehall or Westminster. This is worrying. We might not be on board the doomed ship, but we are not going to walk away unscathed from the wreckage.

GREEK THREAD
Posted by Richard at 13:48