The plans are revealed 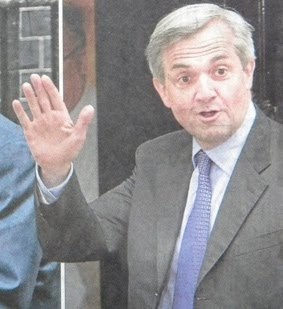 As always, the MSM are behind the curve when it comes to what is really happening. A quick look at Google offers over 2,400 results for "cleggeron" on the web. A search of the news pages, however, yields a mere two.

Meanwhile, prior to a full meeting of the Cleggeron High Command in a cupboard in Downing Street, energy minister Chris Huhne revealed to the state broadcasting apparatus the hitherto secret plan for the destruction of the UK.

Giving the secret Cleggeron salute (pictured – look at the little finger), Huhne told earthling Roger Harrabin that he would pretend to support nuclear power but in fact do everything he could to prevent it happening, thereby ensuring huge power cuts and the collapse of the economy (although he will have to hurry there - Osborne has a head start).

Huhne told Harrabin that the "most scandalous legacies" of the Labour earthlings was their failure to capitalise on renewables, signalling the intent to cover the land with wind turbines. However, in truth, these are secret transmitters for keeping in touch with the Cleggeron empire.

After the Supreme Leaders had conferred yesterday from their converted wheelie bins in the garden of Downing Street, they joined Huhne and the other Cleggerons for a "wonderful meeting" during which earth transmitting devices were banned.

State broadcasting representative Laura Kuenssberg afterwards revealed that earthlings were being "encouraged" to keep their differences quiet. A Special Committee is being set up by the Supreme Leader and his deputy to "thrash out" any disagreements.

A spokesman for a newly emerging opposition group, the Voice Of The English Resistance (VOTER), said it was too early to tell what punishment devices would be used as, so far, the Cleggerons were keen to show their latex human faces. All would be revealed in good time, he said from his secret hideout near Ongar.

RESHUFFLE THREAD
Posted by Richard at 13:20