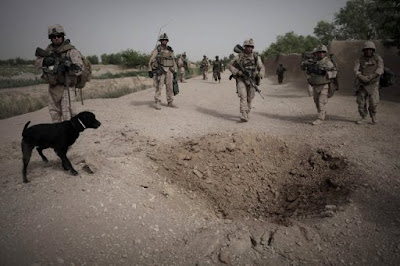 The resignation of David Laws would be big news at any time, but the homosexual relationship gives it an extra edge. The saga of "poofters in power" – as it was characterised by one of my correspondents – has a special fascination in the Westminster village, which is far more interested in who is buggering whom than it is the general proposition that the population as a whole is being right royally buggered by the political classes.

Needless to say, the extravagant coverage being given to the affairs of Mr Laws has pushed other issues further down the agenda and excluded other items completely, not least by the absurd proposition that the low-grade-Laws will somehow "bounce back" once this bit of local difficulty has been quietly forgotten.

One of those issues which has doubtless got less coverage than it might is the vexed matter of Afghanistan. But then the unnecessary slaughter of (mainly) heterosexual young males through the cupidity, incompetence and manic stupidity of our political classes – willingly aided and abetted by the military itself - is of very little importance compared with the weighty matters of state to which the likes of Mr Iain Dale wish to draw our attention.

Nevertheless, some coverage has survived as, it appears, "Call me Dave" is this week convening a "secret summit" of military experts, ministers and Tory MPs on the war in Afghanistan. It is to be held at Chequers and will also be attended by members of the new National Security Council, including NickNick, Hague and little Georgie Osborne.

Also in attendance though will be (or so we are told) Conservative MP Adam Holloway, a former soldier who served in Iraq, Bosnia and Afghanistan. He has publicly suggested that the mission is on the brink of failure, and warned that the heavy presence of coalition troops is "aggravating the problem" in the area.

Another "outsider" will be Rory Stewart, a new Tory MP and former British Army officer, described as having "extensive experience of the conflict". Although rather too full of himself for some tastes, he too has voiced his concern about the mission, suggesting it is doomed, and has publicly questioned the government's key argument for Britain's continuing involvement in Afghanistan - that it reduces the terrorism threat in Britain - describing it as "ridiculous".

Coincidentally (not) we have seen in the media a raft of what could loosely be called "strategy" pieces, the latest being from Denis MacShane in The Observer, who repeats an earlier call to bring the troops home.

The MacShane thesis is that our soldiers have shed enough blood and the strategy of sending patrols out to be shot at by the Taliban is needlessly costing the lives of British troops. Thus, he argues that it is "time to stop the blood sacrifice of our young soldiers in Afghanistan," noting that Britain has no general, no "master of strategy" with the 21st-century vision to stop the blood-letting as officers and men are sent as IED fodder.

War is too important to be left to generals, he says, then asserting – almost certainly correctly – that ministers past and present have flinched from thinking strategically. Instead, far too much has been left to the generals. Says MacShane:

Every six months, a new commander is sent from London to head the fighting soldiers in Afghanistan. These brigadiers rotate, so that, instead of fighting one six-year war, we have fought 12 six-month wars, so that future red tabs can punch their tickets. The can-do, will-do power-point style of the British army impresses politicians, and every visiting minister and journalist is in awe of these tough, sun-burnt, dedicated professionals.

It is hard to say that they and their generals are wrong, but the time has come to put parliament and elected ministers in charge. The pro-war tabloids say they are backing our boys. They are not: they are backing the generals. Officers and men ready to criticise the campaign have no voice.

The problem with that line is that putting "elected ministers" in charge means giving 13th Century Fox and William Hague their head. Yet nothing they have so far offered gives any confidence that things will be better than they were under Labour.

On the other hand, leaving the campaign to generals means more of the same, with precious little being done about the "blood sacrifice". This is largely regarded as tolerable - and necessary to keep the new kit coming and the funds flowing. After all, if the Brass was not allowing the Taliban to spread a sample of its finest in pieces across the plains and hills of Helmand, politicians like "Call me Dave" might actually start asking what the Army is for – and that would never do.

Interestingly, Charles Moore attempted that on Saturday – sort of. Along the way, he remarks that "the current truth" is that Britain's effort in Afghanistan is not working.

But the Grand Charles, who so often dines with the great and the good that he has long lost touch with reality, believes the failure arises because it (the effort) "is not granted political, developmental or military freedom of manoeuvre."

His answer is to ditch Stirrup (who has been a disappointment, not least as one of the few senior officers with any experience of counterinsurgency) and appoint a new CDS. "One hopes that rumours that Mr Cameron would rather appoint a soldier fresh for the task are true," says Charles. This man, though, is still locked in the claustrophobically narrow world of the military perspective, looking for a British military figure akin to General David Petraeus who can lead our forces to the promised land. He will search in vain ... this is not a military problem.

At least MacShane is thinking in geopolitical terms, arguing that "diplomats and development aid should be redirected to Pakistan and India, as well as to China and Iran, to remove the widespread feeling among Muslim communities that this is Kipling's west again seeking to control the lives of people whose customs and needs they do not understand." And thus does he focus on the "burning issue of Kashmir", which is one of the keys which will unlock the Afghan conflict.

The one thing that the Tories - and especially the Grand High Tories like Charles Moore - don't do though is think. Anyone who ever attempts such a perilous process is quickly exorcised from the party ranks. And that is why you have Con Coughlin noting that they have already sold the pass, with an analysis piece headed: "We will never defeat the Taliban if they think we're going home".

Politicians both sides of the Atlantic, says Coughlin, are desperate to escape from the quagmire that is Afghanistan. Yet paradoxically, the only way we stand a chance of extricating ourselves is by sending a clear and unequivocal message that we are going to stay the course, he writes.

Well, we can do that but, frankly, no one would believe it, least of all the Taliban. In that sense, Liam Fox, in saying that he wants to speed up the withdrawal of British troops from Afghanistan, is only articulating the common objective. The question really is the terms – whether we accept humiliating defeat barely dressed up as victory, as we did in Iraq, or whether we hold out and engineer a more plausible fig-leaf to cover our humiliating defeat.

When one looks at today's newspapers, however – and follows through with the TV news if one is mad enough to do so – the over-riding impression is that no-one really gives a damn. We go though the ritual wailing and rending of clothes as body parts are returned in flag-bedecked coffins borne by highly polished limousines but you can see that the real interest is in the "poofters in power" soap opera. If we declared "victory" tomorrow and walked out the next day, few would even notice and fewer still would argue the toss.

Coughlin says we are giving "the unfortunate impression that the West is rapidly losing its stomach for the fight." In fact we lost it years ago and all we are doing is going through the motions.

Tragically, we will have to go through those motions for a while longer, pretending we are serious about fighting this war. That will last for as long as it takes for "Call me Dave" to get round to making some meaningless but profound statements, all to save some notional "face" and make it look as if he is in charge - although in actuality, he will be doing whatever Mr Obama tells him to do.

It is interesting how wars are often much easier to start than they are to stop, and this one is no different. The "blood sacrifice" will have to continue because no one knows how to stop it more quickly, or cares enough to try. But then, in the grander scheme of things, a few more body parts in a few more coffins won't make any difference and it is clearly not worth any great effort trying to safe a few lives. The show must go on, doncha know.