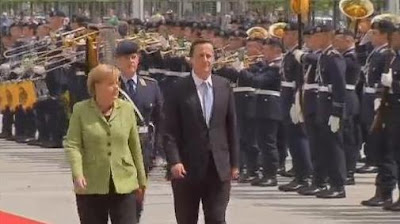 No doubt stung by the charge that he has rolled over once again on EU policy, "call me Dave" Cameron has used the opportunity of his first official visit to Berlin to talk tough on "Europe", telling Merkel that he would not support any new treaty which transferred more powers from Westminster to Brussels.

The suggestion that a new treaty might be needed, specifically to deal with the euro crisis, has emerged over the last few days, for instance in The Guardian. That paper reports seeing a German finance ministry document, setting out a series of demands which, it says, presents Cameron "with a dilemma over whether this would trigger an EU referendum in Britain."

This gave Cameron the cue to do his tough talking, faithfully recorded by The Daily Telegraph, which has him signalling that he would be "ready to veto any attempt to create a new EU treaty to shore up the ailing eurozone."

Despite Dave's determination to give it star billing, however, Merkel was at pains to play down the idea of a new treaty, stressing that it was "early days" as yet, to be considering such changes. This low-key approach was echoed by yesterday's meeting of a "taskforce" of EU finance ministers under the chairmanship of EU council president Herman Van Rompuy.

French finance minister Christine Lagarde suggested forgetting about the treaty and concentrating on the "deliverables", while her German counterpart, Wolfgang Schaeuble, advised his colleagues to do what could be done without treaty changes and then to examine the options. Nobody was proposing any treaty changes in the short-term, said Van Rompuy.

The focus on treaty change, therefore, looks very much a preoccupation of the British media, and then one which The Boy is highlighting – for the very obvious reasons. But, apart from the need to play to his domestic audience, manning the ramparts of the Alamo is a tad premature, not least as any necessary changes might be achieved through enhanced cooperation, as modified by the Lisbon Treaty, which would rather make the histrionics redundant.

That didn't stop little Georgie Osborne laying down the law to the colleagues about disclosure of "national budget plans" and the need for elected members of the House of Commons to be told about them first. Given that budgets are now routinely cleared with the Commission before they are publically announced, this reinforced the growing conviction that little Georgie really is as stupid as he looks.

For the time being, though, the "tough talking" is playing well enough to the gallery, sufficient at any rate to blur the details of last Wednesday's humiliation, when Osborne was obliged to accept the new rules on hedge funds, without even the opportunity to address the council meeting.

It certainly allows "Call me Dave" to tell his faithful that he is protecting the national interest, and some of them are still gullible enough to believe him ... the great "eurosceptic" who is really "engaging" with Europe and telling them what's what.