A period of silence? 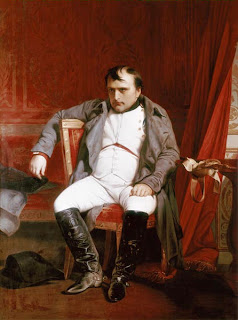 To the surprise of none, we learn from 13th Century Fox that there is to be no fundamental change in the policy underwriting the prosecution of the war in Afghanistan.

We assume that the policy – or the current version of it – has the support of the military High Command but, whether that is the case or not, there can be little complaint. The military have had every opportunity to make its views known to the incoming government. And if they don't like what they are getting, a certain French General set out their options – no less than Napoleon Bonaparte:

A commander in chief cannot take as an excuse for his mistakes in warfare an order given by his sovereign or minister, when the person giving the order is absent from the field of operations and is imperfectly aware or wholly unaware of the latest state of affairs. It follows that any commander in chief who undertakes to carry out a plan which he considers defective is at fault; he must put forward his reasons, insist on the plan being changed, and finally tender his resignation rather than be the instrument of his army's downfall.

This, I picked up as an epigraph in a book I am reading on the battle of Dien Bien Phu. In my contacts with the previous government, I argued – especially towards the end – that, if there was a model from which we could learn a great deal (and more so than some of the other campaigns fought), it was the French prosecution of the war in IndoChina.

Not least, one sees in both campaigns many elements of a timeless military mindset. This combines self-delusion with ignorance and stupidity, all hedged with the arrogant confidence of men dressed up in their uniforms and baubles, who can rely on the support of those who are so easily gulled by such trappings, and confuse "prestige" with competence and capability.

To a certain extent, it is understandable that one should be impressed by uniforms, medals and badges, and confronted by bemedalled Brass, the natural tendency is to believe these holders of high office know what they are talking about. Perversely, however, the converse is more often than not the truth. The greater the trimmings and the higher the titles, the less reliable they are.

But, since at the watershed point of a new government in office, we have all those office-holders expressing by their silence their approval of current policy, no doubt we can be confident of a similar silence from our brave military when, as is almost certain, the vacuity, inadequacy and ultimately the failure of the policy becomes apparent.

But how interesting it is that this government, comprising members of the opposition who were so critical of Labour's Afghan policy, seem to have adopted it lock, stock and barrel, with not even the slightest change of emphasis.