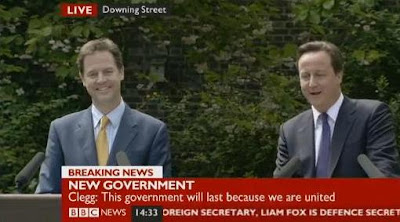 Edict #2701 from the Cleggeron High Command is set to abolish parliamentary democracy.

In a change from current procedures, where a government may be defeated in the Commons by a single vote majority, the Cleggerons are introducing the concept of an "enhanced majority". In future, the votes of 55 percent of MPs are required before a vote of no confidence can succeed.

By such means, the Cleggerons are locking themselves into power for the next five years – until May 2015. "This is a five-year arrangement," says the Supreme Leader: "... so much better than the alternative." "A political revolution is under way," says the state broadcasting apparatus. A political coup, more like it.

A dictatorship is thus born ... but it will be short-lived. The real world is rapidly catching up on these clowns. At least it will save us the trouble of having to shoot them. When this little lot catches up with them, they will be beaten to death by the mob.