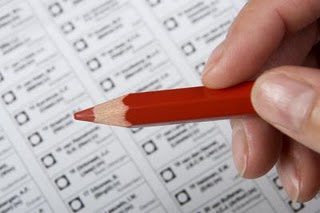 Although I've lived here in the Netherlands for 27 years, not having the right to vote, I've never been very interested in Dutch national politics, but I have seen and understood enough to appreciate that changing the British system of first past the post would be a criminal mistake.

I will grudgingly admit that PR does have some advantages. For one, that rarest of breeds - a competent politician - can actually stay in office beyond the life of a government (like Gerrit Zalm who was Minister of Finance for some 12 years, through several governments and despite changing his own political allegiances from PvDA (Dutch Labour Party) to VVD (Liberal). But, by the same token, it makes it almost impossible to get rid of anyone- however useless - like Balkenende, who had been Prime Minister for the last 8 years.

It's most damning feature is that the final government formation takes weeks to form and in no way mirrors the choices of the electorate. Take the 2006 elections. The CDA (Christian Democrat, centre right) won 26.5 percent of the votes, the PvDA (Labour) won 21.2. In third place, after a major turnaround, came the SP (socialists) with 16.6 percent. Who got to form the government? ... the CDA, PvDa and ... the ChristenUnie (conservative, Christian orthodox) who had won a royal 4.0 percent of the vote. 1.6 million SP votes ignored because the CDA felt that the SP could not be a "stable partner" in a government.

Back in June 2006 there was a dispute between Rita Verdonk (VVD Minister of Immigration Affairs and Integration) and her party colleague Ayaan Hirsi Ali, and the question of whether she was really entitled to Dutch nationality or not because she had lied about her surname and date of birth on her nationalisation application. The D66 party (minority coalition party) supported a vote of no confidence in Verdonk and the government fell.

The current closed-door negotiations between Cameron, Clegg and Brown are not a preliminary, they are a foreboding of how things would be all the time under a proposed new PR system. With one fell swoop you would succeed in turning the British Government into something that would more closely resemble our real government in Brussels, where crucial matters are discussed and decided in secret, with no transparency, no reference to the electorate and, often, a result that is more aimed at keeping the current government in place than really serving the country's interests.

RESHUFFLE THREAD
Posted by Simon at 13:47