If anyone wants to know ... 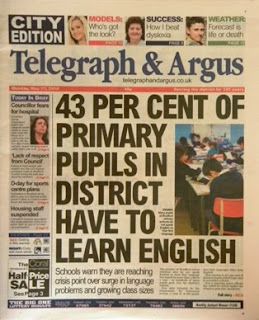 ... why an increasing number of white folk in this district are voting for the BNP, all they need to do is look at today's headline in the local paper. White, English speaking parents are being forced to send their kids to schools where they are the minority, and English is a second language.

But in many parts of multicultural Bradford – as elsewhere – Mr & Mrs Whitey are strangers in their own land, their children second-class citizens, and their language a foreign tongue. Yet, when Mr Council Official wants to cut down his rate of Council Tax arrears, he does not come a calling in the areas where English is never heard. He comes calling on Mr & Mrs Whitey.

And when Mr & Mrs Whitey want something from the Council, well ... forget it. Mr Nice Council Official doesn't do service in white areas. But, before very much longer, Mr & Mrs Whitey aren't going to be so nice and patient. We have had enough.

I just thought you would like to know that.