A false and perverse interpretation 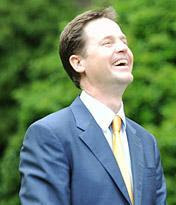 In a fascinating article in The Guardian, Nick Clegg defends his decision to spurn a Labour coalition, "saying it would have been unworkable and regarded as illegitimate by the British people".

However, he then acknowledges that his party's decision has, "caused both surprise and with it some offence." He adds: "There are those on both the left and right who are united in thinking this should not have happened."

Clegg goes on to offer his version of "the truth", claiming that "there was no other responsible way to play the hand dealt to the political parties by the British people at the election." In fact, as we noted, they were given an unplayable hand. Creating this electoral monstrosity does not solve the problem.

The man tells us that, "No government – whether it's a coalition of parties, or a coalition of rivalries as in the Blair-Brown governments – is able to survive without a core set of common assumptions and aspirations."

Once again, he is dead right, although he fails to note also that no government can survive if it holds a "set of common assumptions and aspirations" which are at odds with those of the people. This wholly artificial and unnatural construct does precisely that.

What he and his fellow creatures seem to have difficulty understanding is that they are "not wanted on passage". He chooses to interpret the election result as a message from the people telling the politicians "explicitly" that they didn't want just one party in charge.

That is a false and perverse interpretation. The people rejected the choice offered them, declaring in effect "a plague on all your houses". And especially, they rejected the creed of the Lib-Dims.

Despite that, Clegg still believes "we" – i.e., the political classes - "had a duty to find a way for more than one party to govern effectively." In actuality, their real "duty" is to go away and die ... electorally-speaking. That was and is the message. Short of painting it in their blood on the walls of No 10, it could not have been more explicit. What part of "piss off" do they have difficulty in understanding?

RESHUFFLE THREAD
Posted by Richard at 10:45