Fears in the night 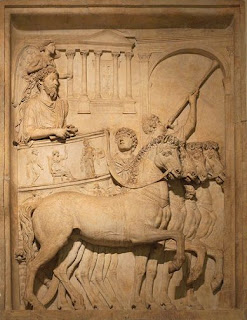 Respica te, hominem te memento. So reputedly spoke the slave into the ear of the great leader, upon his triumphal entry into Rome - loosely translated as "Remember Caesar, thou art mortal."

If we have a role, on this blog, then it must surely be that – a lowly voice whispering in the ear of the powerful and famous, reminding them of their origins.

And this is fanciful, so what! That's the point about blogging – the electronic equivalent of "the cat can look at the King". Its authors can invent any reason they like for going public, and if they chose lofty ideals, that is entirely their own affair. Readers can read, agree or disagree, or simply not read and move on.

The one thing we don't need to do is change our opinions just because many or even some disagree with what we say (although neither does that preclude change if criticism is right or well-merited). We can stick to a line, through thick or thin, even if it costs readers and popularity.

That may well be the case with my current stance on the euro, where for reasons which I believe to be good, I regard the possible collapse of single currency as potential disaster, with huge and malign ramifications for the British and global economies.

This is a line, in common with many, where we have taken some flak from our readers, and although our current hit rate is standing up, undoubtedly our overall rate of growth is affected by this blog's often perverse lines. Had I, in particular, been more amenable to the wants and prejudices of potential readers, our hit rate could be in the stratosphere, alongside Guido, Mrs Dale and the other blogger stars.

I decided that, amongst other things, last night, in the wee small hours - that's now yesterday, as this post goes up with a Thursday dateline. Then, for the umpteenth time, I had been looking at the internet screen, wondering whether the particular set of symptoms I was experiencing – or thought I was experiencing – was close enough to the heart attack I thought it was to warrant calling the emergency services.

In the end, I compromised. I woke Mrs EU Referendum and asked her to drive me into casualty. Hence yesterday, there was a slight gap in the rate of blogging as I gave myself over to the ministrations of the NHS, who may not have been terribly kindly disposed to my bringing my laptop with me in order to continue blogging (and, believe me, I thought about it!).

As it turned out, it was the right thing to do. A battery of tests have found something which, if not currently serious, could well have become so if neglected. To the chagrin of some, therefore, the time spent in the care of Bradford General yesterday may eventually prolong my life – provided, of course, I do as I am told, not least by Mrs EU Referendum.

The experience teaches two things – firstly a lesson for any and every one of my readers. If you think you are having a heart attack, dial 999. It doesn't matter if you got it completely wrong, and it is a totally false alarm. They would rather you did that, than die ... or end up needlessly damaged.

Secondly, in the grander scheme of things, it doesn't really matter what I blog ... or what anyone blogs for that matter. Soon enough, I'm going to end up dead – we all are. So, if I am going to blog, it might as well be about things I believe in, keeping true to my principles – such as they are.

Then, at least, when they finally cart me off, prising my stiff, cold fingers from the keyboard - frozen on the "return" key as I posted yet another attack on ... – at least I will have the consolation that I have kept true to myself. And, just to add further to the piss-off factor, thanks to the ministrations of the NHS and Mrs EU Referendum, that may not be for some time.

Now I'm going to bed. I haven't slept properly for well over 30 hours. Abnormal service (the only type on offer) continues in the morning.