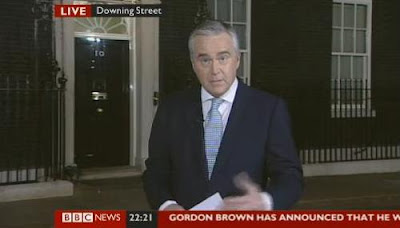 The Tory media (and the Tory Boys) just don't get it. Cameron waltzing into No 10 with 23.5 percent of the vote was fine, but Brown trying to establish a coalition that holds up 37 percent of the electorate is somehow a "bleak day for British democracy".

Actually, there does not seem to have been a better time for British democracy. The electorate essentially voted for "none of the above" and that's precisely what we've ended up with – throwing the political classes into disarray, their claques into confusion and the media into apoplexy.

In fact, the parties have been dealt an unplayable hand. The Tories can only acquire a majority by working the Lib-dims – which was never going to be successful – while Labour and the Lib-dims together cannot raise a working majority. For those of us who wanted to express their utter contempt for the political system, we could not have had a better outcome.

Any which way you cut it though, David Cameron is stuffed. He gambled all on ditching his core vote and cosying up to Lib-dim voters. That failed so he is now cosying up to the Lib-dim party, only to be left standing at the altar as his swain goes schmoozing with Gordon, who has comprehensively outmanoeuvred The Boy.

The funny thing is that the Tories don't yet seem to realise that the game is over. This side of a new general election, there is no way that Cameron is going to be speaking from No 10, and soon enough he is going to have to face the humiliation of facing Brown again as leader of the opposition, for yet more sessions of prime minister's questions.

Yet, despite the turmoil, the stock market soared, the euro strengthened and the cost of borrowing dropped – nothing to do with the events here, but a reflection of the rescue package devised by EU finance ministers over the weekend. Here and elsewhere, life goes on, not least as we still have a functioning government which has not fallen apart simply because "call me Dave" hasn't won his personal lottery.

Sooner or later, Dave and his little mates are going to realise that chaos has now taken over and they are no longer in control. For a short time, we can enjoy their discomfort so, for that brief period, we should gloat early and gloat often.