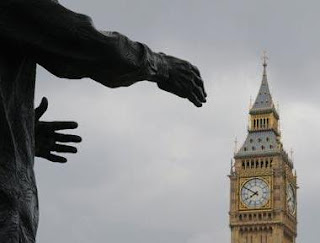 Following his attempt to install his own Enabling Act, Cameron is facing his first backbench rebellion.

But one particularly delights in the comments of Charles Walker, the Conservative MP for Broxbourne. He dismissed the plan as being introduced for the "con-Parliament", adding: "It is not the duty of Parliament to prop up this coalition. That is the duty of the coalition partners and if they can't make it work and if they lose the confidence of Parliament then we must have a general election. It is a simple as that."

Walker then goes on to say that: "This is a matter of convenience because clearly the leader of our party, David Cameron, wants a five-year Parliament and the Liberal Democrats want fixed terms and they don't want there to be a general election along the way." But, he says, "if Parliament and the nation lose confidence in this coalition government there should be a general election, whether that is in two years or three years or four years. This is about the primacy of Parliament."

Although there is something of a similar system in the joke parliament in Scotland – which devotes most of its time to devising ingenious ways of spending English money – such a change in Westminster would involve a significant constitutional change. For that, Cameron has absolutely no mandate (not that he has one on anything, with 23.5 percent of the popular vote).

That the man could even countenance such a change is quite staggering, and one hopes that the good sense of a few remaining MPs, who at least are rooted in the concept of parliamentary primacy, will stop him in his tracks.

And that may not be all. As the reality of this Cleggeron coalition begins to be understood, one is seeing increasing reservations being expressed. The very ethos is so far from anything that could be considered approaching conservative values that many of those who voted for the Conservative Party now believe their votes were obtained under false pretences.

It is highly ironic, therefore, that politicians who a few days ago were complaining about an unelected prime minister in Gordon Brown have ended up championing a completely unelected government, and one which bears no resemblance to anything anyone actually voted for. As the enormity of this dawns, the reactions are going to be interesting indeed.

The question is not whether, but how soon this is going to fall apart.