I don't think we anticipated ... 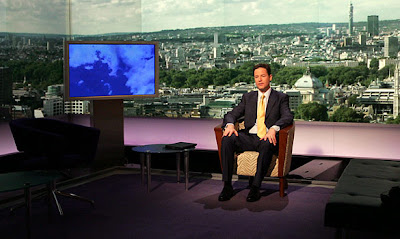 Britain must act now to bring down its record budget deficit because of the scale of the fiscal crisis in Europe, little Nicky Clegg told BBC television today. "I don't think we anticipated ... quite how sharply the economic conditions in the euro zone would have deteriorated and the need to show that we need to get to grips with this suddenly became much greater," he said.

Strewth! "I don't think we anticipated ...". Which planet has this man been on for the last few weeks? I know our politicians are out of touch, but this one is really pushing his luck. Then again, they really are like that. We delude ourselves if we think our politicians are well-informed. Often, they are the last to know what is happening, and the least equipped to understand it.