Ghosts at the feast 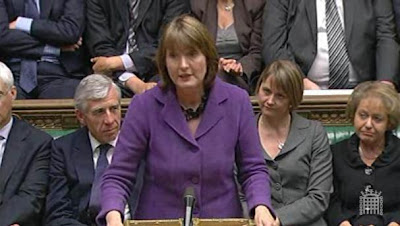 The House of Commons met briefly this afternoon to elect a new speaker – the dreadful Bercow again taking the chair. With the Cleggerons cuddled up on the bench opposite, the Harriet Harperson (pictured) took the opportunity to tell us how "very pleased" MPs were that the British National Party failed to win a single Commons seat at the general election.

To roars of approval, she said: "We all have our differences in this House but all of us are united in being very, very, pleased and relieved that there is nowhere on these green benches a member of the British National Party."

Sadly, it seems Harperson has returned to the House after her re-election without having learned a thing. For sure, the BNP did not gain any MPs but its influence was present today in the very structure of the House, having changed its makeup through the UKIP effect.

No mention was made of UKIP but the very fact that the Cleggerons are on the coalition benches is adequate testament to their influence. UKIP and the BNP have actually dictated the shape of this parliament. They, not the tired, discredited majority parties – none of which could manage to form a government on their own – are driving events.

RESHUFFLE THREAD
Posted by Richard at 17:56