The woolly world of Huhne 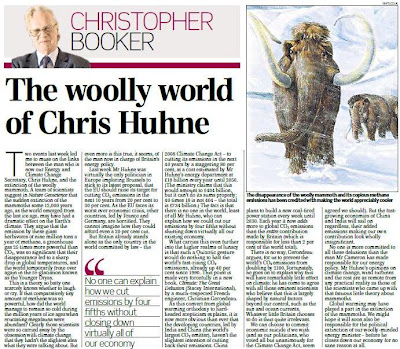 Dellers has produced a stonking piece on climate change in general, followed by one on the Royal Society.

In that second piece, he tells us that he recently had the great pleasure of dinner with Bob Carter who in turn told him that when he goes on speaking tours, there's only one question he ever gets asked to which he is unable to provide a satisfactory answer.

That question goes something like this: "Thank you Professor Carter, that was all very interesting. But please can you tell me why you expect us to take your opinion seriously when it is contradicted by most of the world's leading scientific organisations, including the National Academy of Sciences and the Royal Society?"

Gerald Warner picks up on the Royal Society theme and thus, between the pair of them – Delingpole and Warner – they home in nicely on an important corner of the battle.

But, as both would entirely agree, the fight against the global warming obsession is as much – if not more – a political issue than one of science. And it is here that Booker takes up the cudgels in his column today.

The problem here is energy and climate change secretary, Chris Huhne, with Booker musing about the links between this dinosaur and the extinction of the woolly mammoth.

Where there is actually a link – in an intellectual sense – is between the fatuity of the latest theory which attributes the disappearance of the mammoth with the re-glaciation period known as the Younger Dryas and Huhne's plans for cutting CO2 emissions. They are both just as batty.

Unfortunately for us, Huhne, unlike the woolly mammoth, is not extinct and neither – like David Laws – has he resigned. All we can hope for is that, if the extinction of the mammoths played a part in climate change, the political extinction of our woolly-minded energy minister might also have a cataclysmic if different effect - before he closes down our economy.

And that raises an interesting question. If – as Booker and I would certainly assert – this is primarily a political battle, will we achieve success when we have defeated the political supporters of the global warming obsession? Or, will we overcome it by undermining the pseudo science that underwrites the cult, following which the politicians will slough away and find something else to obsess about?

In other words, whom should we endeavour to make extinct first – the climate "scientists" or the politicians?