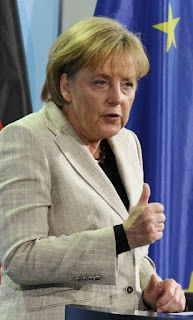 There is probably nothing more parochial and small-minded than a British politician, unless you also count in the national press, which reports foreign affairs with reluctance and most often very badly.

The poverty of reporting has certainly been very evident with the ongoing euro crisis, the Greek bailout and the growing political turmoil in Germany as voters increasingly realise that they have been stitched up by their political classes.

To some slight extent that is remedied this Sunday, with articles such as this in The Sunday Telegraph, although they are pretty light-weight and, more to the point, focused on the problem as if it was a German affair.

What our lame commentators do not seem to be able to cope with is that, even though the UK is not a member of the eurozone, it is very much part of the European Union – and anything that affects the euro is going to have a serious effect on all member states.

Here, what has not been properly taken on board is that which even Merkel is now admitting - that the trillion-dollar stabilisation package that the "colleagues" cobbled together last week merely "buys time". It solves nothing in the medium to long-term and, in fact, its beneficial effect may not last even weeks. Serious commentators are now quite openly talking about the collapse of the euro.

And this is what is more than a little surreal about the whole issue. The prospect of the euro collapsing is serious. Despite our willing it to happen, the impact on currency markets and the EU member state economies would be catastrophic – and prolonged. We could quite easily see Europe dragged into a depression, the like of which made the 1920s look like a rehearsal.

Yet nothing of this seriousness, of the danger, seems to pervade the British media. Even The Sunday Times writes of it in "tee hee" terms, as if it were a German problem, reporting in loving detail the difficulties that Merkel is encountering. There is no hint of the devastating effects that a collapse might have on the UK.

Similarly, we have The Independent writing of the "winds of change" when it should be warning of an approaching hurricane, while The Guardian talks glibly about the need for "financial reform".

But, if the newspapers are bad, the politicians are far worse. Given the potential effects and the seriousness of this crisis, one would expect The Boy to have set up an emergency committee, to be shadowing events and working out our response – warning people of the rocks ahead.

One suspects, though, that the Cleggerons are so absorbed in their own affairs that the idea of an off-shore crisis hasn't registered with them. These oh-so-clever people will probably be the last to realise the peril.

GREEK THREAD
Posted by Richard at 14:52