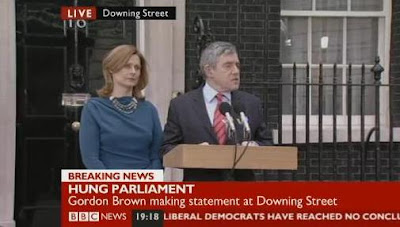 All Hail the Cleggerons! Gordon Brown has submitted his resignation to the Queen. We knew the end must be close when the BBC wheeled out David Dimbleby and a new Conservative anthem was abroad.

Tory Boy blog was predicting that The Boy would be prime minister "by tomorrow morning", so it just had to be true. The impossible has happened – two totally incompatible parties have come together, united in one thing only, their yearning for the trappings of power. And, for that, the Cleggerons will agree to change the voting system to something not one in a hundred actually want, or even care a shit about.

If they go ahead with a referendum on a new system, this will cement in the ultimate farce – a vote on something we don't want instead of a genuine vote on the Lisbon treaty.

Another farcical aspect is the Tory prattling about a "strong, stable government", when the regime will be anything but. And nor will this alliance reflect or represent anything like the whole nation. Cameron managed a dismal 23.5 percent of the popular vote – a mandate this most certainly is not. 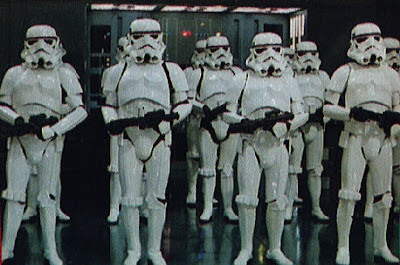 Dave's "not-the-Conservative Party" is to be allied with a Europhile party in a formal coalition, headed by a man many would rather eviscerate than vote for - who now becomes deputy prime minister. These two parties conjoined, both contributing cabinet ministers, are an alien construct which lacks moral authority, respect or anything approaching majority approval.

The Cleggerons may enjoy their brief moment of glory – but the honeymoon will be short. Their reign, we hope, will not last much longer.

RESHUFFLE THREAD
Posted by Richard at 17:14