Split down the middle 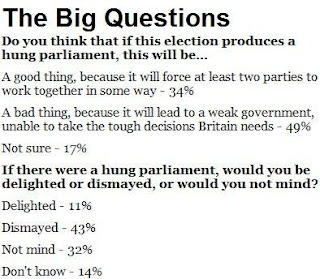 The Times and The Daily Telegraph have done it and The Sun came out ages ago, rooting for the Tories. Amazingly, the Economist did it as well, followed in short order by The Financial Times. Unkind souls have suggested that support from the latter two indicate quite how far the Tories have departed from the Conservative Path.

For all the effort expended on it by Mr Cameron's Conservatives, The Guardian put up two metaphorical fingers and plumped for Cleggy and his Lib-Dims. The Independent did likewise – I think – leaving only The Mirror forlornly backing New Labour, old Labour or whatever it is Mr Brown represents. The BBC, studiously neutral, backs the Greens, the Lib-Dims and even tips its cap very occasionally in the direction of The Boy. Brown, it has decided, is toast.

In fact, barring the odd throwback like The Mirror, the entire press corps seems to have decided that Brown is history, while the polls increasingly put Cameron in the lead. The only uncertainty seems to be whether he will pull ahead sufficiently to command an absolute majority or whether we get a hung parliament – and if so, by many seats his party will fall short.

Tory-leaning papers, of course, are counselling against a hung parliament, arguing that it would lead to a weak government, while the Tories assert that this would mean another five years of Brown. According to the YouGov poll in The Sun, however, the voters are split down the middle.

Against this, the voting intentions seem almost and irrelevance, with 35 percent for the Conservatives (no change), Labour on 30 percent (up 2) and the Lib-Dims trailing on 24 percent, (down 4). The "others" are on 11 percent (up 2%).

Any of those scenarios is possible, especially as The Independent has 40 percent of voters as yet undecided. That will make watching the results through Thursday night into Friday the most interesting thing of this whole election – in fact, the only really interesting thing, although a hanged parliament would be more so.