So where are they? 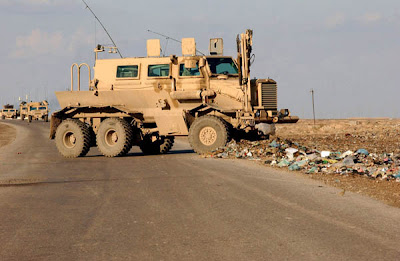 A coroner has said there has been an "unacceptable level of mortality" among bomb disposal experts working in Afghanistan.

Coroner Stuart Fisher made the comments as he returned a verdict of unlawful killing at an inquest in Lincoln into the death of Captain Daniel Shepherd. Capt Shepherd was killed as he defused an improvised explosive device by hand in Helmand province in July 2009. The coroner said it was critical that remote devices were used on bombs.

Well, blow me down with a feather! That's exactly what I said in July 2009, just after Capt Sheherd's death was reported. And if I can see it, from my desk in Bradford, and a Coroner – on hearing expert evidence – can see it (and recommend it), where are all these military experts and on-the-spot defence correspondents? Why couldn't they see it?

Further, I very much doubt whether the Coroner had the Buffalo in mind, as a local coroner would know nothing of this equipment unless he had been told about it. And the one thing the Army seems to be extremely good at during inquests is keeping quiet about the availability of life-saving equipment, and the lethal inadequacies of its current systems and procedures.

There is also always going to be the smart-alec who will say that the Buffalo cannot solve every problem. In fact, there seems to be a remarkable sub-strain of military stupidity which asserts that, because one piece of equipment cannot resolve all problems, it should be used for none at all.

But the fact is that the Buffalo has a proven record in saving lives – it is ideal for investigating suspect IEDs which might otherwise kill bomb disposal operators. We should have ordered them in 2005 (or earlier). The Army didn't, and it wasn't until November 2008 that an order was finally placed.

But that was 18 months ago. In the interim, we have heard nothing, and there is little indication of when these life-saving machines are going to go into service. Where are they, and how long is it going to take to get them into action?

And why aren't all these clever, knowledgeable defence correspondents agitating for their introduction, or are they still waiting for their Army minders to tell them what to think? This kit has been around, in US hands, since 2003 ... for SEVEN years. How long is it going to take before some bright journo actually notices that we are still using men with metal detectors to do the job that should be done with machines?