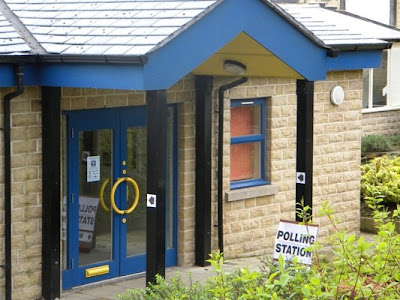 Despite the queues, the ranks of election monitors and the security, I struggled through to the polling station to cast my votes – one for the locals and the other for the national reshuffle. Appearances, however, can be deceptive. The tellers reported that by midday, they had registered as many votes as they had in the whole day, back in 2005.

This seems to be borne out by other local reports, and The Guardian is also reporting a higher than usual turnout in some areas. Thus, one of our earlier expectations is confounded – the initial thoughts were that the turnout might be quite low. What else have we got wrong? 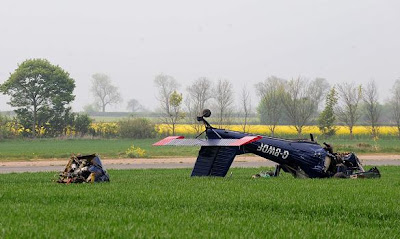 Meanwhile, Farage failed in his attempt this morning to achieve perfect unity between himself and the soil of England, although he came very close indeed (pictured). He is reported as escaping with cuts and bruises, but the pilot was less fortunate, having been referred to a spinal unit for treatment.

In their rush to report the episode, the media seems to have missed a delicious irony ... that Farage, the man who would block Polish imigrants, was flying in a PZL Wilga, an aircraft of Polish manufacture, and a type incidentally which is used by Polish border guards - presumably to help keep the Russians and other undesirables out of the EU.

There will, presumably, be other ironies, as the day develops, not least that Farage will watch the count from a hospital bed, stone cold sober. Under normal circumstances, the odds on the world coming to an end today would have been better.

I'll keep this post updated, to chart developments and add observations, for as long as I remain sentient ... and sober. It is going to be a long night.

UPDATE 21:40 Hrs: They've been "queuing out of the doors" in Sunderland, the first real opportunity of getting rid of Labour in 40 years. Local boy Lee Martin, a Conservative, is slated to win the seat for Sunderland Central - and may be the second seat of the night to declare.

UPDATE 22:01 Hrs: BBC/ITN exit poll from NOP/Mori suggests a hung parliament. Cons 307 (short 19 of a majority), Lab 255, Lib-Dims 59 (down 3) and others on 29. Some scepticism on the result, especially the Lib-Dim figure. And, of course, this does not measure the postal ballots.

The first to declare is expected to be Sunderland South ... normally a safe Labour seat.

UPDATE 22:07 Hrs: Michael Thrasher, poll expert, on SKY "very confident" of the exit poll result - but he does not mention the postal ballots. Those went in at the height of Cleggomania, and could skew the overall result.

UPDATE 22:20 Hrs: Tory Boy Blog doesn't believe the exit poll. Thinks The Boy will have a "good night" and will emerge with an overall majority. Teresa May claims, "biggest loss of Labour seats since 1931".

UPDATE 22:36 Hrs: Labour win for Sunderland South ... declaration in five minutes. Lots of people in Sheffield turned away when polls closed, having been unable to handle the queues.

UPDATE 23:20 Hrs: Betfair reckons that Con and Lib-Dim exit poll votes under-represented, and Labour overstated. But this is "pub talk", with money attached. The ABC vote may be decisive. Already, pundits are asking why the Tories aren't doing better. Look no further than two words: David Cameron.

UPDATE 23:40 Hrs: Pundits are saying that the Lib-Dim "surge" has completely evaporated - an artifact of the media hype attendant on the TV debate, which did not carry through into the polls. So much for the "media election". All the papers coming out for The Boy don't seem to have worked either. Early days yet - the betting exchanges are still rooting for an overall Tory majority.

UPDATE 00:02 Hrs: Osborne claims an "extremely strong result" for the Tories. However, we are reminded that Cameron said that not getting an overall majority would be a "failure". Fraser Nelson and sundry clever-dicks are still predicting an overall Tory majority and/or refusing to accept the exit poll.

UPDATE 00:49 Hrs: Shinners hold West Tyrone, increased swing on DUP. DUP gets to keep Antrim North. Alliance gain Belfast East from DUP - Peter Robinson is out. Six results in according to the BBC. On "voter chaos", Electoral Commission admits "we were caught out". Possibility of some results being challenged.

UPDATE 01:52 Hrs: Kenneth Clarke keeps Rushcliffe with an increase of 3.1 percent. UKIP gets 2,179. Tooting result: LABOUR HOLD - Tories thought they might get it. Sadiq Khan for Labour gets 22,038, an increase of 0.8 percent. Matt Clarke for the Tories gets 19,514, an increase of 8.0 percent, but the Lib-Dims lose 4.8 percent and other small parties get squeezed. UKIP only gets 624. No consistency and no clear trends. Variable swings with different rules seem to apply to different seats. Tooting and Gedling, Torbay, Telford - key Tory targets - all missed.

UPDATE 08:15 Hrs: Heh! Brown back in Downing Street - for the time being. SKY NEWS prediction Cons 309, Lab 259, Lib-Dims 54 and others 28. UKIP effect cost the Cons AT LEAST 12 seats, but almost certainly more. The media haven't twigged it, but it looks as if UKIP could have cost "call me Dave" the election. Several recounts in progress by 58 more seats to call.

One big loser of the night ... the professional pundits who were soooooooo confident the exit poll was wrong.

EVEN WITH DIM-LIBS ON-SIDE, LAB CAN'T MAKE A MAJORITY.

UPDATE 09:10 Hrs: An anti-Conservative progressive alliance? It seems almost certain that there will have to be another general election within the year. No one, not any single party, has a mandate. In a way, it is the most logical outcome. All the parties lost the election.

UPDATE 09:41 Hrs: Now, officially, a hung parliament. Conservatives are the largest party but no one party can command an overall majority. The parties are going to have to talk to each other sensibly, but they're knackered. Tory shadow ministers are "shell-shocked".