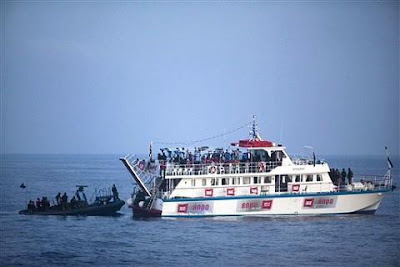 For the record, it is necessary to note the events in the eastern Mediterranean last night, arising after six "aid" ships, carrying more than 600 pro-Palestinian activists and 10,000 tons of supplies, had left for Gaza on Sunday.

Defying a radio warning from the Israeli navy not to approach the region, the ships then ignored Israeli government instructions to steer for the port of Ashdod, their crews stating their intention to land in Gaza and disembark cargo.

This resulted in the predicted, expected and deliberately provoked boarding of the vessels by IDF personnel, in international waters. Subsequently, nine or more activists were killed and an unknown number injured. At least six IDF personnel were also injured, at least one seriously.

Israel's Defence Ministry has blamed the violence on activists aboard the flotilla, who they said had attacked soldiers with knives, metal bars and snatched rifles, and had tried to "lynch the security forces".

The greatest violence appears to have taken place on the Mavi Marmara a vessel sponsored by the Turkish Islamic aid organisation Insani Yardim Vakfi (IHH), which Israel says has links with Hamas.

Turkish television footage, we are told, showed how one by one as Israeli commandos descended by ropes to the deck they were ambushed by waiting passengers armed with what appeared to be metal bars, sticks and in one case, a table.

The reception for two commandos descending from a helicopter was brutal (above - h/t Witterings from Witney) – the first was battered to the ground and heavily beaten and the second, landing seconds later, was assaulted by a man with a bar and forced to retreat into a doorway before fighting back out.

Recep Tayyip Erdogan, the Turkish prime minister, accused Israel of committing "inhumane state terror". "It should be known that we will not stay silent," he said in live televised remarks ahead of his departure from Chile to Turkey, cutting short a Latin American tour. "International law has been trampled underfoot," he added.

In Istanbul more than 10,000 Turks converged on Taksim Square in the centre of Turkish capital to voice anger at Israel's use of force and pray for the dead. Elsewhere in Turkey, families showed their usual respect for the sanctity of human life.

The so-called Israeli "attack", meanwhile, has elicited a a statement from the Cleggeron administration. It has also sparked "international outrage" which, of course, was the whole purpose of the exercise.