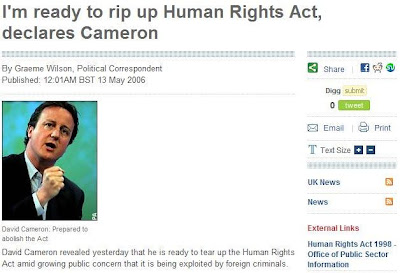 David Cameron revealed yesterday that he is ready to tear up the Human Rights Act amid growing public concern that it is being exploited by foreign criminals.

So proclaimed The Daily Telegraph, telling us that, if he wins the next general election, the Conservative leader will order a review of the law introduced by Labour eight years ago and rewrite the legislation if necessary. The piece continues:

However, if it becomes clear that it was not possible to improve the Act through amendments, Mr Cameron is prepared to abolish it. The Tory leader's aides conceded last night that even if the party scrapped the Act, Britain would still be bound by the European Convention of Human Rights.

As a result, it would still be possible for people to take their cases to the European Court of Human Rights in Strasbourg as a last resort.

A spokesman for Mr Cameron said: "We believe that rewriting or repealing the Human Rights Act would solve most of the problems but if we found there was still a problem with the European Convention, then we would have to look at that.

"David has made clear that if it proves necessary in the long run, he is willing to temporarily withdraw Britain from the Convention so we can negotiate appropriate derogations."

This piece, as you might have guessed, was published a little time ago – on 13 May 2006, almost four years ago to the day. But then, it is only a promise and, like The Boy's referendum promise, isn't worth the paper is isn't printed on.

But why are politicians like Cameron so surprised when we regard them as a bunch of lying shits, and tell them so?

RESHUFFLE THREAD
Posted by Richard at 17:03