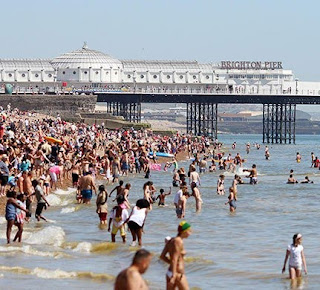 It is rather ironic that, following a weekend when it has really been too hot to blog and the nation swarms to the seaside, we see in The Guardian news of a poll recording a major decline in concern over climate change.

No one with their finger on the pulse needed a survey to tell them that – the heat, so to speak, went out of the issue some time ago. But, for the record, YouGov has only 62 percent of Britons interested in subject, down from 80 percent in 2006. Those unsure of whether human activity is warming the planet has risen from 25 percent in 2007 to 33 percent now.

However, the casework was done in the week after the general election, when the public was focusing on the shenanigans over the new government, so it is unsurprising that climate change was low down the pecking order.

Nevertheless, there is a sense that the warmists have shot their bolt. After the hype over Copenhagen, "Climategate" and related issues, followed by the freezing winter, the Armageddon scenarios no longer have the same traction. The "shock-horror" has lost its power to shock, and is simply another issue queuing for attention.

It is a little worrying though that the survey, commissioned by the energy company EDF, also sought views on electricity generation and found a certain amount of complacency. Only 80 percent say they are interested in where electrical power is made, down from 82 percent the previous year.

This, though, is only a slight change and within that we see an increase in the "favourability rating" for nuclear power stations, rising from +4 to +16 between 2007 and this year. Even amongst Lib-Dims, 58 percent believe nuclear energy has to be "part of the energy balance". Overall, 47 percent favour of the construction of new nuclear power stations. Only 32 percent are opposed.

Basically, the issues that have dominated the last three decades are beginning to fade. Even the Greenies seem to be giving up, their next big preoccupation – or so we are told - being biodiversity. The economic case for global action to stop the destruction of the natural world is even more powerful than the argument for tackling climate change, they are saying.

One cannot imagine that this will have quite the same grip on the public imagination, especially if we are seeing serious currency crises in the wake of the collapse of the euro. Faced with real problems, green issues generally could be on the wane, even to the point where before too long the only people who actually believe in man-made global warming will be the politicians.