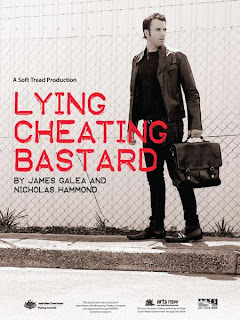 With The Daily Mail breaking the news that the Tories are now "watering down" their manifesto pledge on the Human Rights Act, Gerald Warner takes us to task for believing what they say in the first place.

People "... take the superficial meaning of their words at face value, without pausing to consider what they really mean," says Warner, his tongue so firmly in his cheek that he must be hideously deformed. Nevertheless, a reader takes him up on his admonition, offering an example of how we have so cruelly misunderstood our noble public servants.

One can certainly see that the texts are so similar in content and meaning that it would be very easy to become confused, as indeed did Warner's reader, who confesses: "Yup, I was well suckered. I voted for Cameron under the impression that his government might actually honour its manifesto commitments for more than a week." He concludes: "How naïve I am!"

Someone who was not confused was Autonomous Mind, who notes:

We have been spun a tale of a new politics being created, one that serves the people rather than the political class. The reality is we are seeing the political class perpetrate a fraud against the public, using the challenges of working in coalition as an excuse for following an agenda that abandons pledges offered to appease the public, while tightening the politicians' grip on the levers of power.

I think he is being far too level-headed. We are seeing the lying, cheating, bastards ... lying and cheating. And Mr Warner's reader? Naïve? That is not the word I would have used.

RESHUFFLE THREAD
Posted by Richard at 12:49