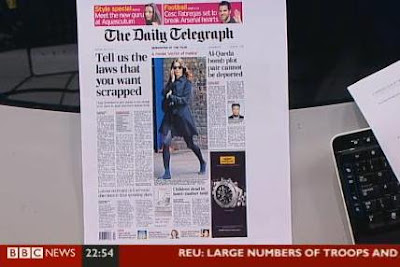 The kerfuffle yesterday about the refusal to deport Abid Naseer, the alleged ring-leader of an "imminent" al-Qaeda backed plot, might prove to be a turning point in what is going to be the short life of this dire Cleggeron coalition. If it is not, it should be.

The importance of the issue transcends the immediate fate of Naseer. On the line was the Conservative manifesto commitment to ditch the Human Rights Act and replace it with a UK Bill of Rights. In responding to the tribunal's ruling, Teresa May had the ideal opportunity to reaffirm that commitment – but she blew it, expressing only "disappointment".

From the BBC we now learn that the Cleggerons are to set up a "commission" to review the Act but there is absolutely no expectation of any significant change. The Lib-Dims are opposed as a matter of principle to any dilution and for the Tories to honour their commitment would split the coalition asunder.

Thus, effectively, at the very first hurdle, the Tories have reneged on a crucial manifesto commitment – and this will not be the only time they will do so. And someone who sees this with absolute clarity is Mary Ellen Synon in her Daily Mail blog. With a directness that puts this blog to shame, she writes:

The most revolting thing about the way Cameron and Hague have sold out the British to the European Union isn't that they've done it; though that is revolting enough. No, the thing which is really sick-making is the eagerness, the enthusiasm with which they've done it. What has been revolting is the speed with which they have grabbed any excuse to dump every Conservative policy of resistance to ever-greater control of Britain by the EU institutions.

Through the months leading up to the election (or reshuffle, as we would prefer to call it), we have insisted that Cameron is not – as has been claimed for him – a eurosceptic. And neither, we have averred, is William Hague.

Now we have Mary Ellen Synon stating unequivocally that, "It has become clear that every word of scepticism ever uttered by Cameron and Hague about the dangers posed to Britain by the EU was fake." Writes Synon: " They never meant any of it. The coalition negotiations with the loser-Lib-Dems didn't force them to surrender any of these policies - it is clear now the Tory leadership couldn't hand them over fast enough."

All of this was so very predictable and, now that we are here, the politicians simply cannot resist the temptation to rub our noses in it. Front page of The Daily Telegraph this morning is a headline, "Tell us the laws you want scrapped", trailing a speech to be given by Nick Clegg today.

In his first speech as deputy prime minister, Clegg will apparently promise "the biggest shake-up of British democracy since 1832", "setting out how the state will shrink from people's lives".

Yet, for all the hyperbole, the tens of thousands of EU laws are totally off limits. Even the Tories' modest plans to repatriate employment and social laws have been abandoned. The great law-making machinery goes on unabated, spewing out its directives and regulations, all the while siphoning up our money. Thus, selling us the idea of the state shrinking when our supreme government is in Brussels and makes the bulk of our laws is a cynical fraud.

It is thus quite difficult to choose between two options to explain what is going on here. If, on the one hand, Clegg believes his own propaganda, he must be so incredibly thick that it is difficult to believe he can knot his tie unaided. On the other hand, if he expects us to believe it, he must surely rank our intellects on a par with slugs.

Looking at the man, his speech and his behaviour, he does not come over as irredeemably stupid. And if he does not believe us to be stupid, he is certainly treating us as if we were. That, as some of his best friends might tell him, is not the best way of getting people on side.

In fact, with this agenda, all Clegg can do is waste a lot of time and a lot of our money. His lasting achievement will be only to magnify the contempt we already have for him and his class. And if he thinks the outcome is going to be any different, he is deranged. He is completely off his trolley, barking, flipped ... or whatever description you care to use.