We really do have a problem 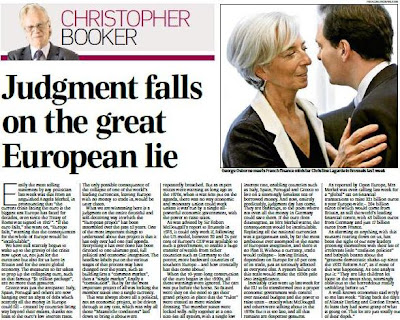 One was a little taken aback yesterday by The Times which chose to compliment David Cameron on his "rational euroscepticism". This is ... a moment for Mr Cameron's sensible approach to Europe: a firm, hard-headed europragmatism, says that paper: "The policy of being in Europe but not run by Europe is right. Quite suddenly, it is also timely."

It is fair to say, though, that Booker, in his column, does not exhibit quite the same degree of approval in his romp through the current euro crisis.

In fact, as alarming as anything in this crisis, he decides, has been the sight of our new leaders preening themselves with their list of irrelevant little "coalition policies" and babyish boasts about the "greatest democratic shake-up since the 1832 Reform Act", as if none of this was happening.

One analyst puts it that: "They are like children let loose in the sweet shop, seemingly oblivious to the horrendous reality unfolding before us," while a well-known economist (exceedingly well known) told Booker: "Bring back the days of Alistair Darling and Gordon Brown. At least they had some grasp of what is going on. This lot are just totally out of their depth."

As to the euro crisis itself, Booker notes that we are witnessing a judgment on the entire deceitful and self-deceiving way in which the "European project" has been assembled over the past 53 years. One of the most important things to understand about it, he says, is that it has only ever had one real agenda. Everything it has done has been directed to one ultimate goal, full political and economic integration.

The headline labels put on the various stages of that process may have changed over the years, such as building first a "common market", then a "single market", finally a "constitution". But by far the most important step of all was locking the member states into a single currency.

That, of course, was always a political project, yet as early as 1978, the British economist Sir Donald MacDougall reported to Brussels that it could only work if, following the US model, between 20 and 25 percent of Europe's GDP was available to enable a huge transfer of wealth from richer countries such as Germany to the poorer, more backward countries of southern Europe.

It is the absence of any mechanisms for making those transfers, of any political legitimacy which would permit them to be made, which is at the heart of this crisis. But, as Booker points out, Britain is just as seriously affected as everyone else. A system failure on this scale would make the 1930s pale into insignificance.

That is a theme picked up by Bruno Waterfield and Angela Monaghan in The Sunday Telegraph, but it is also one rehearsed by The Sunday Times - not the first paper to write of the "Great Depression Mark II".

Following a complete collapse of the euro, the world's second largest currency, Europe would fracture, we are told. Countries would adopt protectionist measures and unemployment would soar to levels not seen since the pre-war years, causing mass social unrest. It would take years to emerge from the crisis, says this paper.

This is where Booker came in with his piece, noting that easily the most telling statement by any politician last week was that from an anguished Angela Merkel. But not only did she pronounce that "the current crisis facing the euro is the biggest test Europe has faced for decades, even since the Treaty of Rome was signed in 1957", she went on: "If the euro fails, Europe fails."

Merkel thus warned that the consequences for the whole of Europe would be "incalculable", which is what Booker and a whole lot of others are doing as well. I guess we really do have a problem.