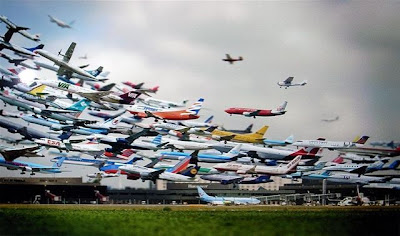 This was the scene (above) recorded at Heathrow yesterday by Reuters' photographer Adnan Hajj, shortly after it was announced that ash tolerances were to be relaxed once again.

Well, the bit about the ash tolerances is real – and I can't help but think that this is the wrong way to go. The better way surely has to be better to define the affected areas, using real observational data rather than relying on the Met Office model. There is just a whiff here of convenience here.

Neither is this an academic issue, as things could be about to get a whole lot worse. The Icelandic Met office has indicated that a small earthquake has occurred at the Katla location and, although a single earthquake is not a precursor of an eminent eruption, it could be the first "sigh" of the awakening powerful giant.

Historically – as most readers will now know - Katla invariably erupts after the eruption of its close neighbour on the Eyjafjallajokull, which first erupted on 14 April 2010 and is ongoing. Magma channels beneath the two volcanoes are thought to be interconnected.

A Katla eruption would likely be about ten times as powerful as the Eyjafjallajokull eruption and could cause worldwide disruption while expelling huge volumes of volcanic ash into the stratosphere. This could circle the globe potentially for years, depending upon the magnitude of the eruption, causing climatic upset and serious economic loss.

We could even be looking at another year without a summer (certainly within the next two years), which could make our current economic problems relatively insignificant by comparison.

The only consolation – and it will be a poor one at that – is that such an event would drive into oblivion the ranks of the warmists who, even to this day are still pursuing their creed, tedious and entirely unconvincing though it is. The downside is that, having been looking for so long in the wrong direction, many politicians and even whole nations will be ill-equipped for a period of significant cooling.

Given the possibility also of a collapse in the euro – which at one time was thought fanciful and is now thought increasingly likely by serious commentators – one need not be alarmist to reflect the sentiment of this blog and ask whether have you started your food storage plan.

Basic survival preparedness is a personal responsibility that was simply a way of life for our ancestors, it says. Let's not forget how.