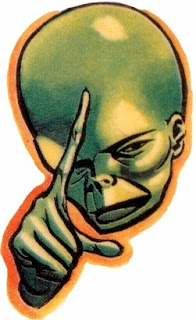 As far as scrutiny by the British media goes, the "colleagues" couldn't have chosen a better weekend to pull a fast one. While the media luvvies (and most of the political blogs – including this one) are obsessed with the attack of the Cleggerons, they are attempting to set up a stabilisation mechanism to ward off an attack of the Europhons, who are exploiting the Greek crisis.

However, Bruno Waterfield is on the case, telling us of the extremely dubious legality of the "mad weekend scramble" to make a deadline of when markets open on Monday.

What is totally unsurprising is that the "colleagues" should try to pull such a stunt. We've been saying consistently that they will do whatever it takes to protect their single currency, and this is just another example of their determination. But it is rather amusing that, on what is supposed to be Europe Day, they are having to shore up their construct, running rough-shod through their own treaty structures.

However, while there are few details on the precise mechanism, Sarkozy is saying that the EU response would "include all the institutions of Europe." He says the euro is facing "its most serious crisis since its creation" – which rather puts the Cleggerons in their place. But then, if this is right, Sarkozy has an unpleasant surprise coming.

Certainly, the Swedish finance minister, Anders Borg, is in no doubt about what they are up against ... "herd behaviours in the markets," he says, "that are really pack behaviours, wolf pack behaviours." The volatility in markets, he warns, could "tear the weaker countries apart."

Thus, something seems to have been agreed although, from this report, you'd be hard put to work out exactly what had been done, other than it only amounts to the creation of a fund worth tens of billions - when hundreds of billions are probably needed.

Ambrose Evans-Pritchard also has problems working out what has happened but, he says, if the early reports are near true, the accord profoundly alters the character of the European Union. He adds:

The walls of fiscal and economic sovereignty are being breached. The creation of an EU rescue mechanism with powers to issue bonds with Europe's AAA rating to help eurozone states in trouble - apparently €60bn, with a separate facility that may be able to lever up to €600bn - is to go far beyond the Lisbon Treaty.

This new agency is an EU Treasury in all but name, managing an EU fiscal union where liabilities become shared. A European state is being created before our eyes.

No EMU country will be allowed to default, whatever the moral hazard. Mrs Merkel seems to have bowed to extreme pressure as contagion spread to Portugal, Ireland, and -- the two clinchers -- Spain and Italy. "We have a serious situation, not just in one country but in several," she said.

The euro's founding fathers have for now won their strategic bet that monetary union would one day force EU states to create the machinery needed to make it work, or put another way that Germany would go along rather than squander its half-century investment in Europe's power-war order.

As this crisis intensifies, the UK elections could by mid-week be looking like small beer. But now is not the time to be in the middle of tedious and protracted power-sharing negotiations, with the Lib-Dims holding out for changes in the voting system. Already, the Cleggerons are looking irrelevant, as Brown and his ministers deal with the real crisis.

The way this is going, it could work in Brown's favour - we could see him still in Downing Street by the end of the month, setting out the terms for a GNU ... and we're not talking about a song or an animal.

GREEK THREAD
Posted by Richard at 16:37