Only to be expected? 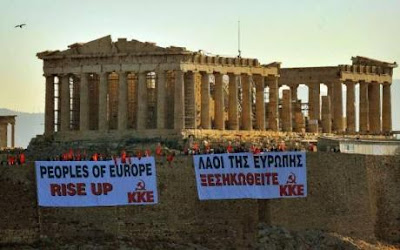 I don't think anyone was under any illusions that the reaction in Greece to the new austerity package was going to be anything other than violent, and so it has proved to be, with reports coming in of three killed in a bank torched by protesters.

Equally, it was very evident that there was going to be a sharp market reaction, and also that Merkel was going to have a tough time of it.

What is less easy to determine is how much of this represents the ritual response and how much is rooted, dangerous opposition which has the potential in the short-term to derail the financial support package.

One gets the impression that, while the Greek public sector unions are hostile, there is not the mood in the general population to oppose the deal. And nor do the financial markets – huff and puff as they might – want to see the euro brought down, or another global financial crisis.

On balance, therefore, the forces of "stability" may at the moment favour the status quo, which might enable the spread of so-called "contagion" to be checked. On the other hand, the situation is extremely precarious, and we are delving into areas of the unknown. Events could dictate the outcome, with the various players losing control.

Rather like the election on Thursday, therefore, the outcome here is impossible to predict, although it is unlikely that we are going to wake up any time soon to find that the euro has collapsed and the EU is no more. However, we can always dream.