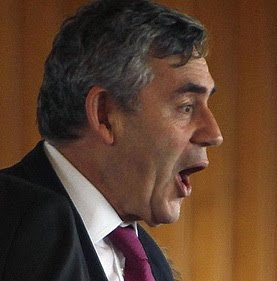 Having in their own ways completely failed to predict the current political impasse, two of the self-appointed gurus of Tory politics are, it would appear, falling out over the wisdom of a Tory/Lib-Dim pact.

Neither of them – along with most of the media – seems to be able to understand that the chemistry of such a pact is so wrong that it may not happen. Nor – imbued with their own "clunking fist" narrative of Gordon Brown – have they appreciated the subtlety of the prime minister's approach – standing above the fray with the message that, when the children have finished pratting about, they can come and see him for a proper deal.

Thus, after the two Cs and their respective teams have exhausted themselves in fruitless negotiations, I fully expect little Cleggie to go crawling to Brown, with the strong chance that we will see the present incumbent still in Downing Street by the end of the month.

But even if the Cleggerons do reach a deal – sufficient for The Boy to slip into No 10 by the back door – it will not last. We are still looking at another election, most probably by October.

Nor is there any great mileage in the Tories squawking about their "mandate". Having acquired a mere 36.1 percent of the votes cast, against a turnout of 65.1 percent, they can claim only 23.5 percent of the electorate. Put another way, less than one in four people voted Tory.

On the other hand, while the Tories took 10.7 million votes, a Lib/Lab pact would command 15.4 million and 315 seats as opposed to the Tory 306. When it comes to a mandate, the Liblabs have greater claim than the Tories acting alone. And, although lacking an absolute majority, Brown could simply "dare" Cameron to go to the country again, bringing down the government and triggering another round of instability.

As far as it goes, then, possession is nine-tenths of the law. And the longer Brown holds on, the greater the chance he has of outmanoeuvring the opposition and staying in place. Not for nothing do they say: he who lasts, laughs longest.

RESHUFFLE THREAD
Posted by Richard at 13:58