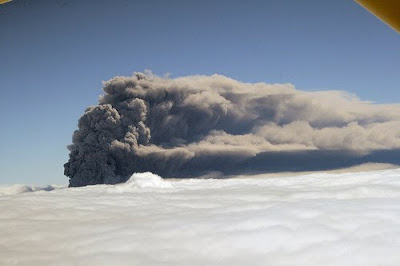 Once again, volcano ash from our hyperactive neighbour in Iceland is causing havoc with commercial aviation in the UK (and elsewhere). Manchester, Liverpool, East Midlands and Doncaster airports were among those that were closed from 13:00 BST Sunday, with Birmingham and Norwich closing down at 19:00 Hrs.

And once again, we are hearing complaints from airlines that the safety authorities are over-reacting. Richard Branson, for Virgin Atlantic, has described the closure of Manchester airport as "beyond a joke" and a British Airways spokesman has said the bans were "not justified on safety grounds". He has called for airlines, not authorities, to be responsible for the decision.

The problem, it would seem is that, while the tolerance levels for airborne volcanic ash have been eased, there has been no fundamental change in the monitoring methodology, which still relies on the NAME atmospheric dispersion model operated by the Met Office.

British Airways said the airspace authorities were being "overly restrictive" and the airline had "no confidence" in the model being used as a basis for deciding on airspace closures. "It is clear," says the airline, that "there is too much reliance on the theoretical model of ash spread produced by a single body - the London Volcanic Ash Advisory Centre."

The airline wants greater observation of the ash cloud using satellite imagery, ground radar and airborne tests. It already buys in data from the US forecaster, WSI, which it says makes greater use of satellites to pinpoint the location of the ash.

The airline may have a good point, as the model has its limitations and needs verification. However, the Met Office, while openly admitting the limitations on its website, it is being less than candid in is current public statements. It claims that its model is "well proven" and provides results "consistent" with other models, such as those in France and Canada.

Although the Met Office goes on to claim that its model "works well" and is "sophisticated", that really is not the point. There are major uncertainties in the basic modelling, which are magnified over time and distance, making direct verification absolutely essential.

Of the various options available, satellite monitoring is extremely valuable for tracking dense ash plumes, but is of limited value when the cloud is no longer visible, even though it might still be harmful. Ground-based sensors are also of some value, although they have limited range and generally cannot pick up anything above 10,000 feet. National coverage is also patchy and incomplete.

Thus, for accurate, real-time monitoring on a large scale, there is actually no substitute for monitoring aircraft. Yet it is here that we have a crucial capacity shortfall. We are still effectively reliant on the one FAAM BAe 146, which is the only suitable aircraft in the UK currently equipped for such work.

Yet, the authorities are showing considerable reluctant to rely on such monitoring – which invites the suspicion that this is for no good reason other than the fact that assets are limited. Instead, Met Office scientists have been tasked to use the aircraft for the secondary role of updating the model, thus flying an extremely restricted range of sorties – the aircraft currently being despatched to France.

Given the very obvious discrepancy between what should be happening (a high volume of direct observation flights) and what is actually happening (continued reliance on modelling), the indications are that, as before, the Department for Transport (which is responsible for monitoring airspace) has been caught out with insufficient assets to do its job.

This is something which politicians in the recently departed administration were obviously reluctant to admit, but it is also that which the media is not currently reporting. Nor are the airlines particularly helping themselves, their complaints lacking clarity and focus.

Resolving this problem in the long term needs the establishment of a new monitoring service, properly equipped with enough suitable aircraft to keep an eye on the whole of UK airspace. Providing them would be an ideal test for new transport secretary Philip Hammond, although it is unlikely that he will do any better than his Labour predecessor. Through the earlier volcano ash crisis, the Tories showed no technical appreciation of the issues – or even any capability to understand them. And even if they did, they will doubtless be just as reluctant to spend the money on the necessary monitoring aircraft.

It would not be overly pessimistic to thus aver that the current unfinished business will remain unfinished, and – from the point of view of governance – that we are in for a period of more of the same.