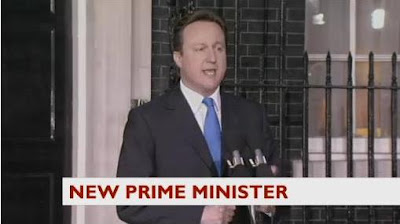 So, the leader of the Cleggerons (now with his own website - cleggerons.com) beams into No 10 after all. I got that wrong – totally and completely. I never thought that a Conservative Party could make a formal alliance with the Libdims. But then, I should have remembered that this is the "not-the-Conservative Party".

Bizarrely, it seems, it was Brown's own parliamentary party which rejected the idea of a Lib-Lab pact, MPs and ministers attacking it as a bad idea that was always doomed to failure. Hence, once negotiations started up, the Lib-Dim delegation got the bum's rush and went rushing back to the bosom of the Tories.

This gave The Boy his victory, gained not through his own negotiating skills or his "success" at the ballot box but handed to him on a plate by the Labour party which still has some residual scruples. 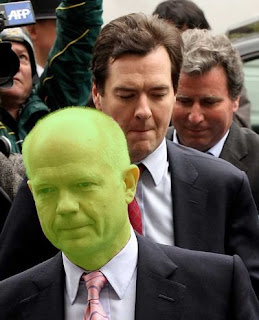 Not so the "not-the-Conservative Party", which then had the Cleggeron leader in his first speech telling us, "One of the tasks we have is to rebuild trust in the political system". As leader of an unnatural, unelected coalition – which has not yet declared the terms of its coalition – he has to be freekin' joking.

Just to add to the joke, little Georgie Osborne is chancellor of the exchequer. Hague is foreign secretary ... to join the unelected prime minister. That, we are told, should reassure the party. And the cleggie as deputy prime minister has yet to be confirmed.

And so it all starts. It is some 70 years since we last saw a coalition government, set up as Hitler launched "Operation Yellow" on the mainland, an operation which was to culminate in our retreat to Dunkirk and evacuation, and the start of the Battle for Britain. How things have changed. Then, we were reliant on the "few". Now, one might say, never in the field of human endeavour is so little owed by so many to so few.