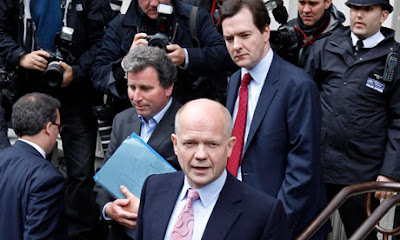 I had to listen to it twice, just to make sure I hadn't got it wrong. But yes, William Hague did tell the assembled media that "we" – presumably the Conservative Party – believe "very firmly in an elected prime minister".

This is from the author of the stunning slogan, "in Europe but not ruled by Europe", demonstrating beyond peradventure that, if Master Hague is not terminally thick, then he is something even worse.

Once again ... in this country, we do not elect prime ministers. We elect MPs. Political parties then decide on their leaders and the majority party – if there is one – recommends a candidate to the Queen. It is the Queen, then, who appoints the prime minister (and, indeed, all the other ministers).

That Hague can't seem to learn this simple lesson puts him in the same league as Tories – like Cameron – who seem to believe that you can promise a referendum on the Lisbon Treaty and then walk away from that promise without an electoral penalty.

We don't expect our politicians to be geniuses, but this lot is so thick they don't deserve even to live, much less form a government.

RESHUFFLE THREAD
Posted by Richard at 15:49