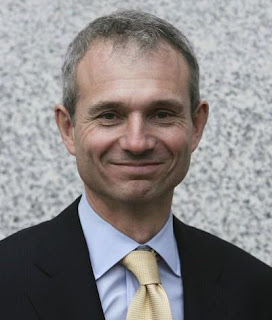 An unfortunate choice of tie colour signals a change of the guard as the Supreme Leader of the Cleggerons eschews Mark Francois and selects in his place David Lidington (pictured) as Europe minister.

This is supposed to be taken as a sign of a Tory "thaw" on the EU. Liddington, as a former Foreign Office adviser, is thought to be less eurosceptic than his shadow predecessor.

However, Bruno Waterfield has already informed us that the EU is planning to dump on the not-so-supreme-leader (on an EU scale) by demanding early negotiations on plans for an EU "economic government", just at a time when he wants to reassure his back-benchers that he hasn't completely sold out (which, of course, he has).

With absolutely no concern for the not-so-supreme-leader's domestic problems, France and Germany are also planning to push through controversial hedge fund regulations next week after turning down British pleas to defer a vote in Brussels.

This will be the first serious challenge for little Georgie Osborne, who will have to try to convince the "colleagues" to go easy on the regulation – which will be decided by QMV – to avoid fatally damaging British financial services and making him look a bigger plonker than he does already.

Should he survive that bruising experience, he then has to deal with Herman Van Rompuy, the EU council president. He has set up a task force to build a new "gouvernement économique" to cover all 27 member states of the Union. The new body, with strong support from France and Germany, holds its first meeting on 20 May and little Georgie will be expected to attend and give it his blessing.

Not least of the issues which is likely to disconcert a man who would prefer not to have anything controversial to hit him just yet is a proposal that will mean that Britain would have to submit budgets to the EU for vetting before they are debated in the House of Commons.

This won't make any practical differences, as the Treasury has long cleared most of its measures with Brussels before announcing them, but it looks bad on paper and rather stuffs a not-so-supreme-leader who wants to be in Europe but not ruled by Europe.

Nevertheless, it will certainly give the emollient Mr Liddington something to do. He can explain to his counterparts that, with an amount of grumbling in the ranks of the former Tory party, it might not be terribly helpful at this particular juncture for the Cleggerons to be seen to be caving into Brussels.

Whether this will make any difference at all, though, is moot. With the euro on the slide, the "colleagues" have their own problems and may be less than sensitive to the political needs of the not-so-supreme-leader. But still, there is always that nice Mr Clegg who can tell all those happy former Tory back benchers how much nicer it is to be nice to all those nice Europeans – or something to that effect.

I've always wanted to see what an eviscerated Lib-Dim leader looks like.