A culture of dishonesty 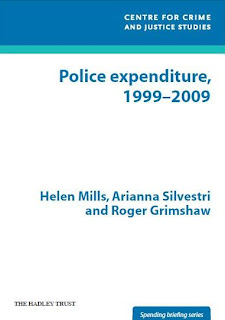 A good test for this new government will be a report produced by the Centre for Crime and Justice Studies at King's College, London.

It is picked up by, amongst others, The Daily Mail, from which we learn that police are using dishonest methods to boost their pay, mainly through a series of overtime scams.

Thus, while over the last decade, the number of police officers employed has risen by more than 15,000 to 142,151 with more than 16,000 police community support officers also being recruited, there was no decline in overtime.

Interestingly, most of the bill has been picked up by local taxpayers through the police precept element of their council tax, which is something we have seen year-on-year.

We have, thus, a situation where, each year, the police put their hands out for more money – essentially to fund corrupt practices – and then turn up on your doorstep to arrest you and put you in jail when, finally, you refuse to pay for a service that is rarely provided.

Unwilling to go to jail yet again, we take the stance of refusing to pay until the bailiffs actually turn up on the doorstep, a small but ritual annual protest that at least makes a point, even if it is routinely ignored by officials who issue warrants in the name of "customer services".

The test for the government, then, will be whether it can break from the Labourite cycle of throwing more money at public services in the expectation that they will get better, and impose a discipline that seeks to obtain better for less, cutting the huge amount of waste, flab and – in this case – corruption that has accrued.

At this stage, our expectations are extremely low, not least because we still see the ritual cry for more spending on "dog whistle" issues such as law and order and defence, and very little appreciation of value for money. When, or if, we actually start seeing improved services AND a decrease in taxes, then we will have change we can believe in.

For the moment, the evidence is that we are to plenty of increases in taxes, and none at all – as yet – that there will be any improvements. We watch and wait.