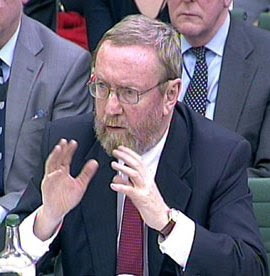 Professor John Beddington, still the government's chief scientific adviser – despite the change of government – is back in the news. He has, we are told, "hit out" at climate sceptics who attack global warming science on spurious grounds.

That, at least, is the "take" from The Guardian, which has the statements – from the great man's first interview since the election - framed as a "veiled attack" on the former Tory chancellor and arch climate sceptic Nigel Lawson. Beddington says that he had met Lord Lawson to brief him about the science of global warming.

Beddington agrees that true scientific scepticism was healthy and must be encouraged but he criticised individuals and organisations that "cherry picked" data for political ends. "There is no doubt that there are organisations and individuals who will choose to characterise the science as being nonsensical on the basis of what are not reasonable criticisms," he says.

To support his argument, the then highlights the spurious argument that because the UK winter had been so cold, climate change science must be wrong. There was a difference between weather and climate, he says.

"The fact that we have had a very cold winter in Britain does not mean that the climate is not getting warmer," he said, adding that rejecting global warming on those grounds was wrong. "This is just not science. This is commentary," he said.

And so goes the drivel. You do have to hand it to these warmists. While every possible climatic anomaly has been harnessed to the cause of global warming, Beddington has been silent. Get a sceptic playing the same trick and he is right in there, complaining.

Silent also when his colleagues cherry-pick data and run a political show for entirely political ends, Beddington then complains when he sees a political response. And then, the science can be entirely unreasonable, but the criticism must be "reasonable" – by his definition.

What he can't seem to understand is that his own double standards are themselves unreasonable, and entirely negate his arguments. When he applies the same standards to the warmistas as he does to their critics, then he will be worth listening to.