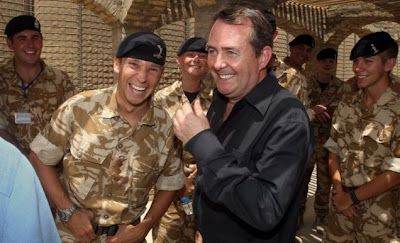 Politically, for the period that British troops remain in Afghanistan, it is going to be an interesting time. We are going to see a Conservative defence team, which in opposition specialised in low-grade sniping, now exposed to its own medicine, as unhappy events unfold.

What would have been a classic example of this is the resignation today of Colonel Bob Seddon, the principal ammunition technical officer of the Royal Logistics Corps. He has decided to call it a day over his concerns that cuts have left his team - which deals with the threat of IEDs in Afghanistan – "overstretched and undermanned".

This, of course, is a game Fox cannot win. There will always be deficiencies emerging somewhere in the order of battle as our forces continue to engage with a relentless enemy. Of those deficiencies, Fox will have little direct knowledge – until they are brought to his attention – but, having been so keen to hold his predecessor responsible for every defect, will now find himself similarly in the hot seat.

If that is indeed Fox's view, it says little for his broader understanding of the politics of the region, but this should come as no surprise. On this and many other things, he shows every indication of having learned absolutely nothing during his period in waiting.

From his privileged position as defence shadow, Fox has had every opportunity to explore the Afghan crisis at length and, had his understanding developed at all, he would undoubtedly be thinking along the lines of Denis MacShane, one of the few to understand the malign role of India in the conflict.

"We cannot keep on sending British soldiers to die in the will-'o-the-wisp search for an ultimate military victory," says MacShane. "Instead of warcraft we need statecraft and that must involve a stronger relationship with Pakistan. There has been much talk about Pakistan and the solution to Afghanistan. But there will be no solution in Pakistan until India changes its strategic approach in the area."

And, if his strategic thinking is lacking, so too is his response to local issues such as perceived shortages. Tonight's Panorama documentary may be a case in point, where Christina Schmid, widow of Staff Sergeant Olaf Schmid, complains that her husband, who was killed by an IED in Sangin, was "flaking" with exhaustion on the day he died because of demands being made on him and his elite team due to staff shortages.

Taking them at face value, Fox has no choice but to respond to such complaints by promising to make good the shortages. But, had he been more conscientious in his research, he might have learned that there were alternative and less labour-intensive way of doing things, than currently undertaken by the military, which could square the circle – providing better military effect at less cost and loss of life.

Crucially though, where over the weekend there emerged what appeared to be a split between Fox and development secretary Andrew Mitchell, a more rational approach by Fox could have had the two ministers singing from the same hymn sheet.

The essential issue here is that, for many of the intractable military problems in the British area of operations, there are no pure military solutions. With such solutions are being sought, in vain, this gave Fox the opening to offer alternatives, such as the tried and tested engineering solutions which have served others so well.

Such an approach would have put Fox on the same wavelength as Mitchell, but instead has him creating his own hostages to fortune, with his current promise that the new government will "do everything we can to ensure that, whatever you are asked to do, you are properly, fully equipped to do so, to maximise your chance of success and minimise the risk to you."

That is a promise which Fox cannot keep – it will always be the case that there could have been something more which could have been done while, on the other hand, nothing Fox has in mind by way of strategy would offer any chance of success. He has already squandered multiple opportunities, to the extent that history has perhaps already marked Thirteenth Century Fox down for failure, before he has even got properly into gear.