A howl of impotent rage 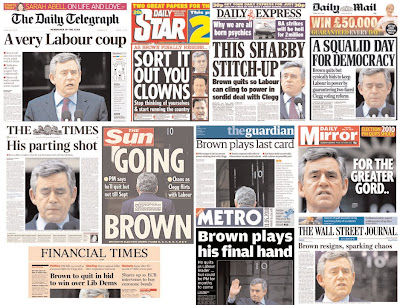 Just looking at the collection of front pages from the media today tells its own story. Not only have the Tories been comprehensively outmanoeuvred, the media didn't see it coming. The strident headlines, therefore, are a reflection of their own impotence and ineptitude.

One should recall in all this that, prior to the election, the media had more or less convinced itself that Cameron was a shoe-in – and even yesterday they were convinced that The Boy was going to be in No 10 by close of business.

None of the stupid, vain bastards foresaw the UKIP effect, even though we were writing about it in March and, in fact, coined the expression back in 2005. Even now, despite a full list and an analysis, we are still getting commentators who have not quite understood the scale and reason for The Boy's defeat.

The point about the political commentariat, however, is that it lives in its own bubble, constantly reinforcing its own beliefs and prejudices, talking to itself and rigorously excluding anything it finds uncomfortable or challenging. You will not get accurate or penetrating analysis from this sorry lot – merely the latest "groupthink" as they all rush to tell each other how clever and wonderful they are, huddling together in the belief that the wish is the reality.

Now, every extra day and hour that Brown spends in No 10 is testimony to the failings of the political commentariat, whose capacity for getting it wrong is matched only by "call me Dave" Cameron's incompetence. He will go down in history as one of the most inept and unsuccessful political leaders since Neil Kinnock. Small wonder, they are howling. Short of the capability to understand the world around them, this is their most natural response.

RESHUFFLE THREAD
Posted by Richard at 14:36