Trouble in the wind 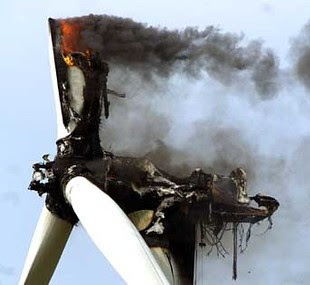 Away from the likes of Chris Huhne and his mad vision of a land covered with wind turbines, the real world is beginning to intrude.

According to the independent business intelligence service Wind Energy Update, wind turbine operation and maintenance (O&M) costs are increasing sharply, rising to two or three times more than first projected and causing a 21 percent decrease in returns on investments.

O&M costs were found to be especially high in the United States, now the world's largest wind power market, but the even the average world costs are coming out at 27 US cents per kilowatt hour, compared with the 20 cents earned in the US through production credits.

The report says that while close to 80 percent of the world's wind turbines are still under warranty, "this is about to change." R&D is focusing especially on gearbox reliability. Many gearboxes, designed for a 20-year life, are failing after six to eight years of operation, the report finds.

The bizarre thing is that, while Huhne is so insistent that nuclear should not be given any subsidy, even with the massive subsidy it already gets, wind cannot be made to pay. And yet, in the economics of the madhouse which characterises British energy policy, it is wind which is set to inherit the earth.

There must be a special kind of madness that inflicts politicians – clearly, their brains are not wired the same as in normal human beings.