Cameron must be pleased and a little relieved that the latest (and only) opinion poll gives a thumbs-up to his coalition, with 64 percent of voters approving of it.

There is, as one might expect, a strong tribal component to this result, with 87 percent of Tory voters supporting their man, and 77 of the Lib-Dims also backing the coalition - even if many of their activists are extremely unhappy bunnies.

Nevertheless, this is enough – for the time being – for The Boy not to have to worry about his critics, or to make any attempt at building a "big tent" coalition. In fact, if he really wanted to piss off people like me – if he deliberately wanted to maximise the piss-off factor – he is doing exactly the right thing by appointing Chris Huhne as energy secretary.

What might actually be worse is that The Boy probably isn't even aware of the effect of what he has done. Even if he was, he probably wouldn't care. In the Cameron book of politics, being unreasonable is objecting to anything he does. Therefore, the remedy is in our hands. All we have to do his tell ourselves he is wonderful, that everything he does is wonderful, and the problem is sorted.

However, life isn't like that. Not only is Huhne a rabid Euroslime, Booker in his column puts his finger on the more immediate problem – simply that he has no practical solutions for our looming energy crisis.

Instead of solutions, we got the stomach-turning spectacle of the new secretary and a beaming David Cameron standing side-by-side while Huhne proclaimed their dedication to halting "the greatest challenge facing mankind": global warming.

Both parties, Booker reminds us, are pledged to cut Britain's CO2 emissions by more than four fifths in the next 40 years. Both are committed to building thousands more wind turbines. And neither ever mentions the crisis fast bearing down on us when we lose 14 of the nuclear and coal-fired power stations which supply 40 per cent of the electricity that currently keeps all our economy running.

Fortunately (for my blood pressure) I didn't listen to Radio 4's Today programme when, in a "babyish interview" – says Booker - Huhne wanted to put across two messages.

One was that, as a long time opponent of what he has described as the "failed technology" of nuclear power, he is not prepared to give any financial help to electricity companies wishing to replace our ageing nuclear power stations. (This we knew already since, although he didn't say so, any subsidy would be against EU rules.)

The other was that "the most scandalous legacy of the past 13 years" is that we haven't been going all out for wind power, tidal power and wave power. This he now intends to remedy as the centrepiece of his policy. 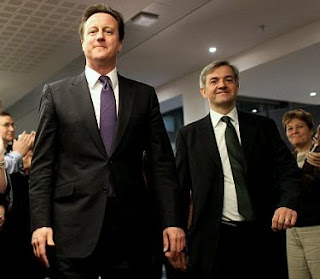 And that is what is truly terrifying about putting Huhne in charge of Britain's energy policy. Like the rest of the Cleggerons, he clearly hasn't the slightest practical understanding of what is involved – which Booker then goes on adequately to demonstrate.

There are only two possible outcomes of all those "green" delusions which Huhne and Cameron seem to share, says Booker. First, our energy bills will soar to astronomic levels, pushing millions more households into "fuel poverty". Second, we can look forward to a time when power cuts are as common as they are in South Africa, which is now going for nuclear as hard as it can.

In the name of fighting an imaginary problem, Booker concludes, we are soon going to have an imaginary economy – and Huhne's name will join all the others on its tombstone.

In between then and now, however, a lot of other people – old, cold people - will have their names prematurely appended to tombstones. Doubtless, Euroslime such as Huhne will consider this a small sacrifice to pay for the cause of global warming. And, as The Boy stands foursquare alongside him, we shall know him by the company he keeps.

One just hopes that Booker's headline is accurate in its broader sense.