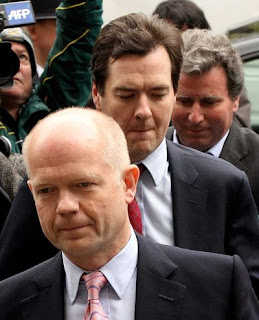 As the political pundits desperately try to work out the unknowable, what most certainly has not been factored into this ongoing drama is the inadequacy of the main players.

Far from having all the facts at their fingertips during the election campaign, with a complete and accurate grasp of the situation, it seems the Tories didn't have the first idea of what was going on. Right up to the last minute on the Friday, they believed The Boy was going to be sauntering into Downing Street by midday. Some of the chaps had even been resting up through the latter stages of the campaign, in order to be ready to take hold of the reins, to guide the ship of state and all that crap.

This and much more is brought home in a piece in the Mail on Sunday, rather confirming that the Tory high command are so far up their own backsides (or each others') that the only way they can see daylight is through the gaps in their teeth.

Once again, of course, we are seeing "bubblevision", where being at the centre of things, far from conferring perfect vision and insight, creates a peculiar kind of political blindness. The self-indulgence of our political classes, however, is rebounding on us, as the supposedly outgoing chancellor is still running the show, over rescue attempts for the euro.

Instead of being at the helm, little Georgie Osborne is relegated to the team negotiating with the Lib-Dims. The unreality is contagious though. One sees this as an attempt by aliens disguised as human beings (pictured) to set up The World Federation of the Cleggerons. Soon enough, we expect them to be standing on the steps of 10 Downing Street proclaiming: "All Hail the Cleggerons! We are the Hairs of Blair! Kneel before us, the mighty ones - someday we will rule the Galaxy."

There again, perhaps we have been watching too much Sky TV.

RESHUFFLE THREAD
Posted by Richard at 13:48