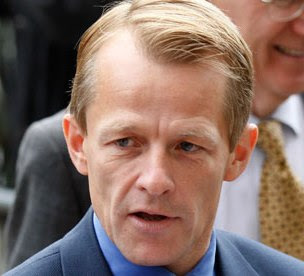 It is rather ironic that millionaire David Laws, chief secretary to the Treasury, and therefore one of those who decides how much to abstract from our pockets, should have his own fingers in the till, having paid his "secret lover" tens of thousands of pounds, in contravention of the rules.

As a general observation, it is quite strange how these rich men in government, who are never short of a bob or two and get quite comfortable salaries, thank you very much, still feel the need to rob us blind. And they do so not only officially but for their own personal enrichment – no doubt claiming that they have made such great sacrifices that they're worth it. But it all supports the impression that "them up there" believe that rules only apply to the little people.

In this politically correct world, one must pass over the fact that the man is a homosexual and thus avoid wondering whether this condition is becoming semi-compulsory for preferment.

But what is interesting is the braying from the clever-dicks who have made such a point about the lack of military experience amongst Labour defence ministers. Yet these same people seem to have been quite content (or, at least, silent) when Laws was appointed his party's schools and children spokesman.

However, all was made good when Laws was appointed to the Treasury. If the man turns out to be a thief, he is quite obviously well qualified for government - and especially his current post, and more so as he has not made any offer to resign. When scum gets to the top, it is in good company, and rarely feels the need to change its position.