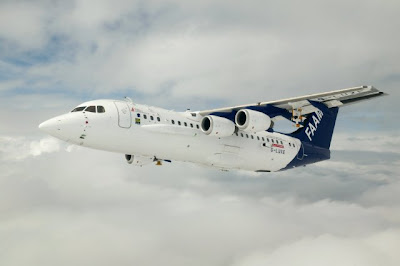 Only a week ago, the ash cloud seemed very much in the news, and then it fell off the agenda with remarkable rapidity. But ... it's back. North-easterly winds, that have brought the Bank Holiday chill and snow to some parts of the UK have also delivered another unwelcome package from Iceland.

From 0700 BST today, no clearance will be given to flights originating or terminating in Northern Ireland controlled airspace, while Belfast International, Belfast City and City of Derry airports will all be closed until further notice. High altitude overflights are unaffected.

One early casualty could be David Cameron who was planning to deliver in Northern Ireland what one source described as the "most pro-Union speech since Partition" by a British political leader. However, unlike ordinary mortals, Cameron will "if all else fails, travel by helicopter."

Further south, the Irish Aviation Authority (IAA) has also notified operators that their controlled airspace will be under the same regime, which will be in place until at least 1300 BST. Airspace over the Outer Hebrides was closed to all operations yesterday at 1800 BST

This time, though, the CAA is up front, rather than the Met Office or NATS, saying it is "closely monitoring" the situation, albeit that it is still using advice from the Met Office. However, while The Times asserts that officials "are poring over Met Office forecasts as they try to predict what path the cloud might take," they are in fact better prepared this time round - something which is not mentioned by this newspaper.

The FAAM BAe 146, initially grounded during the last episode awaiting repainting, has been available to fly every day since 20 April. It is on standby for volcano plume assessment until the 15th of this month, as required by the Department of Transport. Today, the aircraft is due to fly on a five hour sortie to evaluate the reliability of the NAME model as the principal tool for implementation of the "new" CAA rules for flying in ash.

We are also told that activity at Eyjafjallajökull increased over night on 2/3 May with NOTAMs being issued for closure of some UK airspace on 3rd May to the NW of Scotland. The latest NAME model runs show a "black" no fly zone to the west of Scotland on 3rd and 4th May with a more extensive no-fly zone covering Scottish Islands and potentially some of mainland Scotland on Wednesday 5th May.

In the light of this forecast, FAAM reports that the flight today is being set up "to validate the concentrations and distribution of the ash with a view to informing the forecasts for 5 May which currently could lead to commercial flight disruption." This, of course, is what should have been happening on 16 April and immediately afterwards, to overcome the acknowledged limitations of the Met Office model, whence much of the disruption could have been avoided.

After the 15th of this month, the aircraft is supposed to be undergoing an instrument refit and, through June is committed to a heavy programme of flying to "assess the pervasiveness and importance of night time chemical processes, and in particular NO3, for UK regional and Western European air quality, eutrophication, and ultimately to quantify its linkages to climate change."

Of course, if the Eyafjallajokull volcano does not behave itself, and we get more North-easterly winds, the flying programme may have to be changed. Climate change will have to wait ... one almost wishes for another major eruption – at least the aircraft will then be doing something useful.