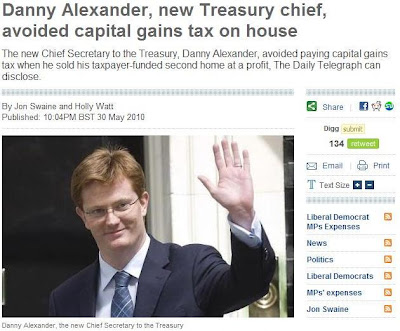 It doesn't really matter what they do now. When the Cleggerons appoint a man as Chief Secretary to the Treasury who, until five years ago was press officer for Cairngorms National Park, their credibility is shot to pieces.

When it turns out that this same Danny Alexander designated the property as his second home for the purpose of claiming parliamentary expenses but described it to HM Revenue and Customs as his main home, their credibility is in tatters.

Alexander didn't break any law but the Cleggerons are planning to increase the rate of the tax for owners of second homes in an emergency budget next month. And Alexander is going to be a key member of the team that shepherds this change through the system.

It's not just that they are a bunch of low-grade, two-faced shits that sticks in the craw - it's that they're doing it with our money and then sticking us with increased tax bills to pay for it all. The time for slaughter comes ever closer.

LAWS THREAD
Posted by Richard at 00:05