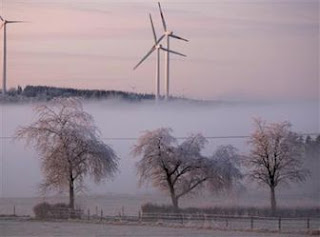 I was talking to a power supply engineer the other day, and asked him whether it was worth getting a back-up generator to protect against the possibility of power cuts. The answer was a most emphatic "yes", and he is by no means the only one who has given that answer.

But what is just as worrying is that the likelihood of anything intelligent being done about the problem has just receded. According to a Eurobarometer poll released yesterday, only 20 percent of those polled throughout the EU are in favour of nuclear energy, 80 percent back solar energy and 71 percent are in favour of wind energy. Which just goes to prove that the majority can be wrong (and most often is).

But with that level of hostility towards nuclear, and those sort of percentages in favour of renewables, the chances of any politicians (apart from the French, who don't give a damn) making the "tough decision" and going hard for nuclear are extremely slight.

The poll itself has been published as a curtain-raiser to the publication of the EU's strategic energy review, copies of which have already been leaked. But first sight indicates that it is not going to become a runaway best seller.

In fact, a study of the document simply affirms that the EU is not in control and the key decisions – as always – are going to have to be made by member states. And they, it would appear, can be as bad as the EU when it comes to making the right decisions.

That generator is looking more and more like an essential as days pass.